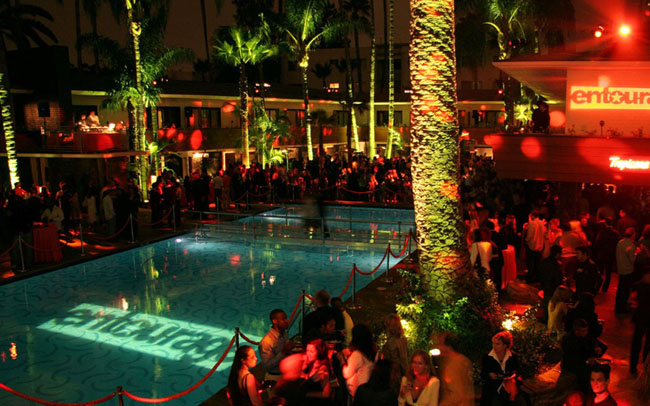 Los Angeles is a city plagued by stereotypes, both good and bad. To some, it’s a cesspool of vapid fame seekers. To others, it might as well be renamed Shangri-LA. If there’s a single avatar for both points of view it’s the swimming pool (David Hockney knew it), representing effortless splendor as well as the cluelessness of privilege. Tap into summertime nirvana with these poolside soirees at L.A. hotels.

The Standard
Revered for its swanky vibes and breathtaking view of downtown, the Rooftop at the slick hotel comes alive with various poolside events. Swimming with Sharks on August 3 promises free vodka Jell-O shots, $4 beers, $35 champagne, and live DJs. The flyer reads: “Bring waterguns and your a-game.” 8300 Sunset Blvd., downtown.

Terranea Resort
Soak up views of the Pacific Ocean and Catalina Island every Sunday through Thursday from 10 a.m. to 5 p.m. at the Cielo Point Poolside Party. Relaxation takes the lead at this beachside oasis. 100 Terranea Way Drive, Rancho Palos Verdes.

The London West Hollywood
The palm-encircled pool atop the London has sweeping views of the city and specialty drinks like the hibiscus mojito. Open to the public every Wednesday throughout the summer, this swanky hotspot offers patrons a free drink from 7 p.m. to 8 p.m and live DJs throughout the night. 1020 N. San Vicente Blvd., West Hollywood.

Hyatt Regency Century Plaza
Straying from the club scene and moving at a more mellow pace, the Hyatt Regency Century Plaza with its infinity pool is open to hotel guests and anyone who visits its in-house Spa at Equinox. With no minimum charge, a quick nail polish change entitles you to a lazy day in the sun. 2025 Avenue of the Stars, Century City.