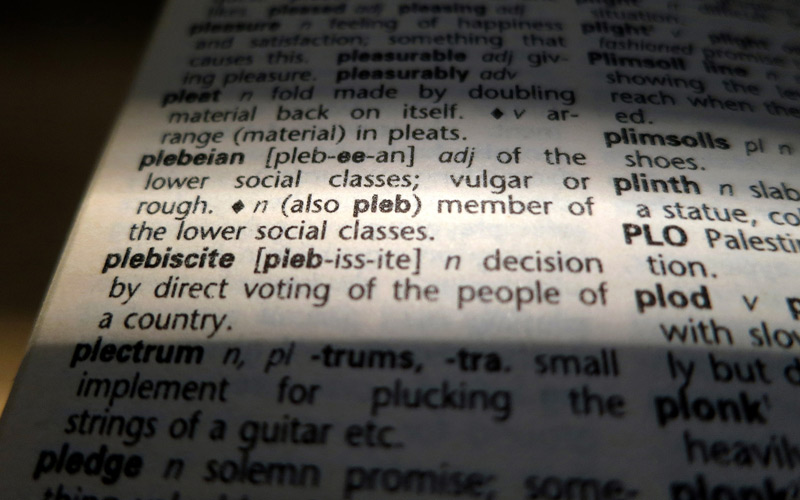 Trend stories always include examples of a particular trend the author has noticed. The author uses the existence of a few cherry-picked instances to declare that a massive societal shift has absolutely most definitely occurred. This leads the author into the opening he himself has conveniently created to write about that topic. Let’s pretend I already did all that and talk about the nation’s deepening adjective crisis.

Adjectives, for those of you who don’t traffic in words for a living, are the parts of speech used to describe nouns and pronouns. Two adjectives in the following quote have been bolded:

“I will build a great wall on our southern border, and I will make Mexico pay for that wall.”

Let’s call the first one, which describes the wall as great, a Status Adjective. While some adjectives are necessary to accurately convey information (like southern border), Status Adjectives such as great, amazing, and fantastic, are more or less judgment calls. This is what makes them interesting. In addition to revealing something about a noun or pronoun’s status in the world, they reveal something about the person using them.

Now, somewhere deep in the recesses of your brain (where the difference between your and you’re is kept track of) you’re maybe sort of aware that adjectives, as they pertain to writing, are poor form. Too many adjectives ruin good prose. “Show. Don’t tell.” That’s what editors tell writers. Nouns and verbs show. Adjectives tend to tell.

When you “show,” you let the reader integrate ideas, thoughts, and imagery. This is a rewarding experience for the reader because humans are constantly seeking information and patterns. “Showing” forges a deeper connection between the writer and reader. It’s a hand reaching into the void, grasped.

When a writer does too much “telling,” it’s lazy. It’s easier to say a thing is bad than to describe it in a manner that gives readers the information they need to come to a conclusion on their own. “Telling” is yelling into the void, which is mainly to the benefit of the yeller.

Insomuch as we talk about why adjectives are bad, that’s usually where the discussion ends—with how overusing them makes for bad writing. Yet the adjective is insidious for another reason. This insidiousness—and because this is a proper trend story I will cite no empirical evidence to back this claim—is definitely on the rise.

The Status Adjective is restrictive. It passes judgment on a noun or pronoun. It’s limiting. It says, “This is the way it is, and you can either agree with me or you can make this awkward for everyone involved and disagree.” Status Adjectives are the official part of speech of the authoritarian.

If you’d like to measure the degree to which a person is authoritarian (favoring blind submission to authority), note how often he or she 1.) Speaks plainly and honestly and lets the listener decide 2.) Strafes their language with words that raise or lower a noun or pronoun’s status.

Someone who is constantly saying words such as stupid, weak, smart, sad, tough, dangerous, bad, lightweight, amazing, huge, tremendous, terrific, classy, great, overrated, terrific, ugly, unbelievable, disastrous, or strong, is a person who wants you to accept what they say.

Let me paint a scenario…

Say there’s a politician who repeatedly calls someone crooked. You in the crowd may not know whether or not this other person is crooked, but when 20,000 people around you roar in agreement, it certainly seems much more plausible that whatever this person is doing must make them crooked. Everyone around you seems to think so, and you all seem to agree on a bunch of other things besides this.

Not to blow your mind out of the back of your knitted hat, but in this situation the crowd itself becomes an adjective, modifying the speaker with praise. Hence we have an adjective loop in which no one ever has to show anything. There is only telling. The louder the adjective, and the more often it’s repeated, the more comfortable everyone feels about it repeating it.

By injecting his speech with adjectives, someone who knows little about the issues or the way government works can feign knowledge, signal loyalty to his own tribe, and project the appearance of strength and action nonstop, at all hours of the day and night. Not everyone would be fooled by this, but maybe just enough people would be.

It’s becoming increasingly clear that—and yes, a good trend piece must include a Tom Friedman-esque turn of phrase—we live in the Age of the Adjective.

Joe Donatelli is the Senior Writer at Los Angeles magazine. You can follow him on Twitter @joedonatelli and Facebook. He wrote What Your E-Mail Sign-Off Really Means.