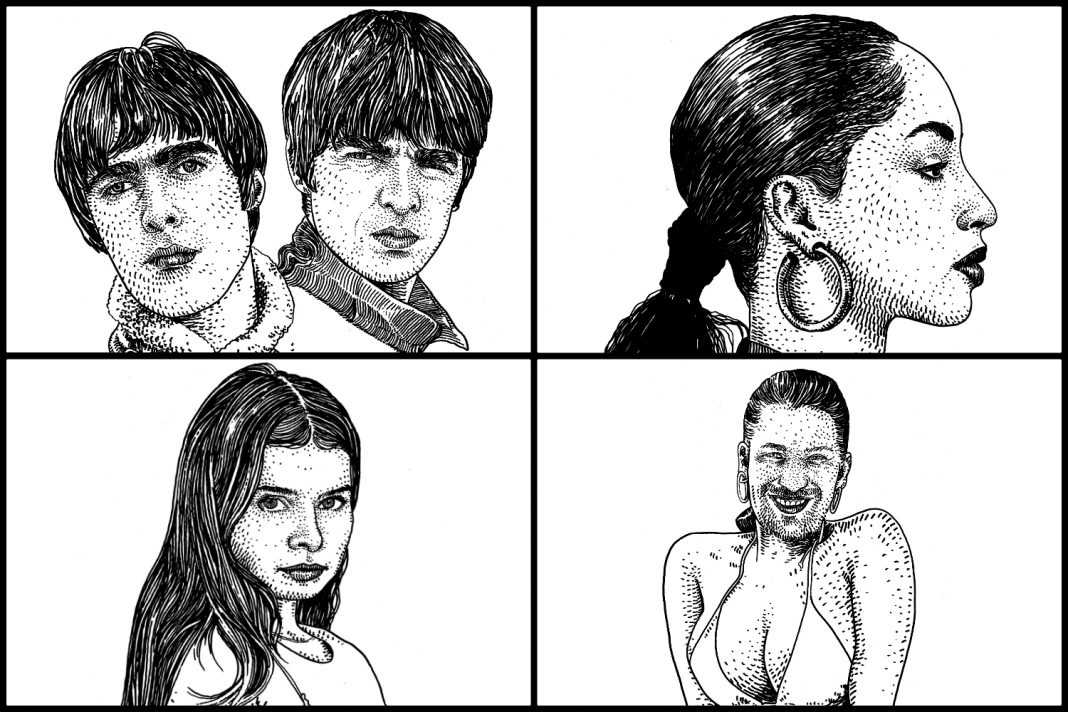 Adam Villacin began 2019 with Desmond Dekker, illustrating the late icon of Jamaican music and posting the result on Instagram with the original available for $100. A string of artists would follow on a near-daily basis as Villacin drew from genres ranging from ska to post-punk to hip-hop to disco. By October, he had delved into legends of L.A.: The Doors, Love, The Runaways, The Beach Boys, Guns n’ Roses.

Villacin aims to draw 365 musicians this year and, in that process, he’s explored the brilliant, strange and sometimes uncomfortable histories of the people who shaped popular music. The artist, an L.A. native currently based in the desert town of Flamingo Heights, has long explored subcultures in his work and his year of music follows a collection of zines on subjects ranging from skinheads to dead wrestlers, as well as a series of 100 illustrations of athletes.

The project began as an artistic exercise that would also make originals available to people at more affordable prices. It’s grown into a web of stories where genres and eras intersect. Initially, Villacin planned to move through his selection of musicians by genre. “I realized how impossible that is,” he says by phone. Instead, he pulls out threads of information. During his recent Beach Boys kick, Brian Wilson led to Van Dyke Parks, who had worked on Smile, and an illustration of Dennis Wilson was followed by Charles Manson, who had stayed in Dennis’ home.

Crucial to the images are the biographies that Villacin writes for each entry. These have grown in length over the course of the year, including little known facts and some of the more problematic pieces of musicians’ histories. “I try to keep it as encyclopedic as possible,” he explains, although Villacin is known for inserting commentary here and there. “The things that make them interesting aren’t that they pioneered a sound or sold this many records or were influential to this genre,” he says. “So many of these musicians have had just really wild, fucked up experiences and strange connections.”

It’s a series that’s based both on Villacin’s tastes and wider significance. The combination of the two have led to some unexpected successes. “Obviously, the Morrissey one, I was expecting a lot of people to ask for that,” he says, “but I think the most asks I ever got was on Aphex Twin.” Other surprise hits: Royal Trux, PJ Harvey, John Cage, Dimebag Darrell and the no wave artist Lizzy Mercier Descloux.

Throughout the year, Villacin has changed course a few times based on news, particularly deaths of icons like Ric Ocasek, Bushwick Bill, Scott Walker and David Berman. “I’ve definitely hit the reset button when certain people have died,” he says. “David Berman was a huge one for me. I thought he was one of the most important songwriters we’ve ever had, really. When he died, I thought that was important to include that tribute right away.”

And the series, which he intends to compile into a book, is expanding beyond its initial concept. Villacin estimates that there are about 250 more people that he should draw, so he’ll keep at it for another year. He says, “It will feel incomplete to me to put that book out into the world and not have everyone that I want to include in there.”

RELATED: A History of L.A.’s Most Legendary Bygone Music Festivals