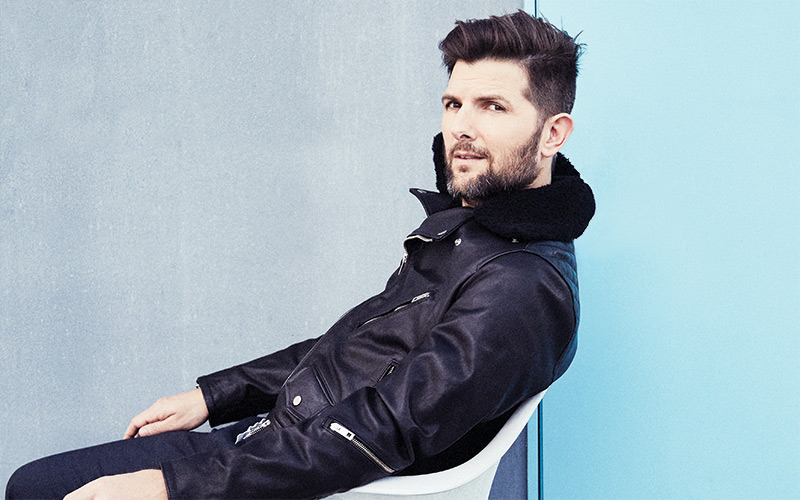 When he graduated from Pasadena’s American Academy of the Dramatic Arts, Adam Scott figured he’d stay in Hollywood’s moodier lane (bit parts in Six Feet Under and Party of Five indicated as much). Since infiltrating the Apatow crowd with roles in Knocked Up and Step Brothers, though, the 44-year-old actor has been leaving his particular brand of deadpan humor on small-screen shows (cult darling Party Down, critical darling Parks and Recreation), under-the-radar indies (The Overnight), and insular side projects (a podcast about the band U2 called U Talkin’ U2 to Me?). After playing it straight in HBO’s Big Little Lies earlier this year, Scott returns to the land of the half-hour comedy with Fox’s Ghosted (October 1). Splice Midnight Run with The X-Files, and you’ll have a sense of its tone: The series follows Max Jennifer (Scott), an expert in multiverse theory, and disgraced LAPD cop Leroy Wright (Craig Robinson) as they investigate paranormal phenomena in L.A. “We’re trying to get in the same realm as Ghostbusters and Beverly Hills Cop,” Scott says. “Being anywhere near Beverly Hills Cop feels like a good goal.” We asked him to contemplate his future late-night show and how he really feels about Li’l Sebastian.

What would Adam Scott be doing in an alternate universe?
He would either be a political journalist or a music journalist on tour with—actually, you know what? Being on tour with a band sounds awful. I get carsick. I don’t really drink. I would be sleep deprived. I hadn’t revisited that dream in a few years, and it just came out of my mouth, and it sounds terrible. So never mind.

Aliens ask you to take them to your leader. Where do you take them?
I’d take them to Elizabeth Warren, tell them she’s president, and let them take it from there. They wouldn’t know any better.

Fictional name for your Upright Citizens Brigade show?
Something like Spend Your Money Wisely and Go to Any of the Other Shows Because This One Won’t Be as Good.

Three L.A.-based comedians you’d co-host with?
Ben Schwartz is the the best. Joe Mande. And Reince Priebus. He’s out of work now, so.

Pick a hype man: Bono or Li’l Sebastian.
Li’l Sebastian—are you kidding? The crowd would go crazy. Everyone loves him. Honestly, I don’t get it.

You love Raiders of the Lost Ark. Indiana Jones or Pawnee, Indiana?
I miss Pawnee more, so Pawnee.

Would you rather fly in a plane with Harrison Ford or Han Solo?
Oooh. Oh. That is a really good question—That. Is. A. Really. Good. Question. I don’t know Harrison Ford, but I feel like I know Han Solo pretty well. So I would say Han Solo. I don’t want to infringe on Harrison Ford’s privacy by asking him a bunch of stupid questions, which I inevitably would.

But you could do that to Han Solo?
Yeah. Yeah yeah yeah. I wouldn’t worry about being embarrassed in front of Han Solo as much because he’s not real.

Name for your late-night show that would never be network approved?
Adam’s Butthole Cocaine Extravaganza! I don’t think that would get approved.

I’ve asked a few people who’ve done this interview that question, and you easily took it the furthest.
I’m working with a network now, and I know for a fact they’d say no to that.