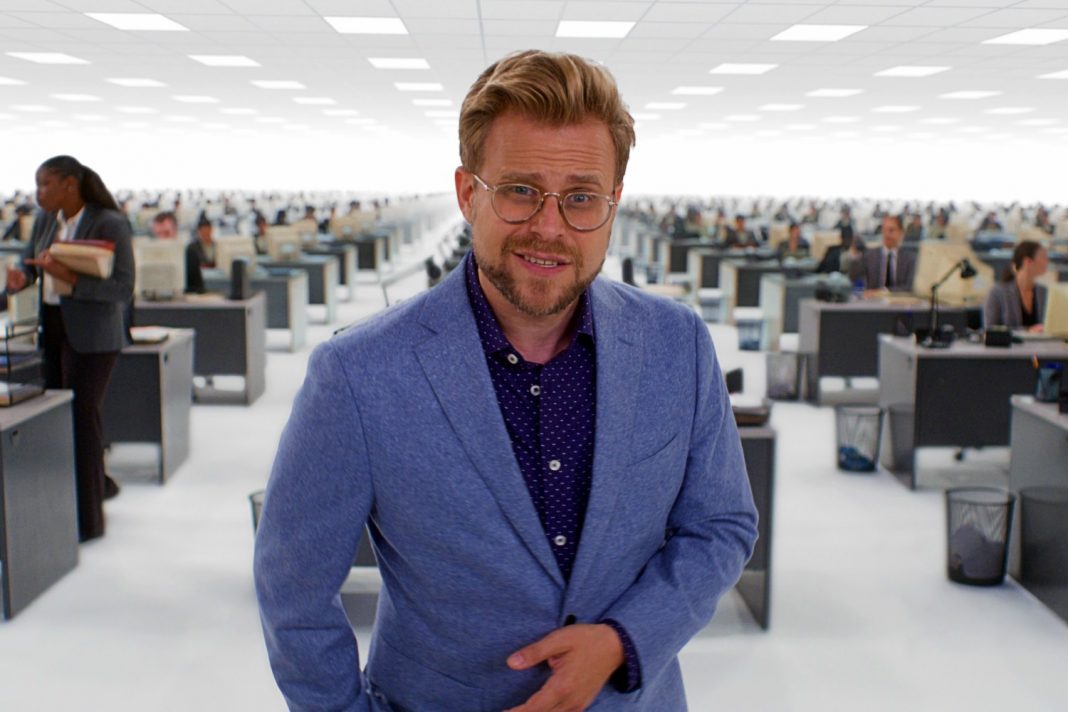 Adam Conover is back, and this time he’s got his sights set on the government. The creator and host of Adam Ruins Everything brings his signature blend of humor and insight to Netflix‘s six-part limited series The G Word with Adam Conover.

The program is one of the many projects to come out of the multi-year deal the streamer made with Higher Ground, the production company created by Barack and Michelle Obama. With episode titles like “Food,” “Weather,” “Money,” “Future,” “Disease,” and “Change,” it’s pretty evident the topics Adam will be delving into. But if you’re thinking that since the Obamas are the ones overseeing the project it will be just a one-sided perspective, think again.

“We knew going in that we were going to be criticizing the policies of both Republican and Democratic administrations,” Conover told LA Magazine during a telephone conversation promoting the series. “When I make a television show, part of what I want to do is make sure that whatever the audience is thinking we can’t do, whenever they’re thinking, “Oh, they’ll never be able to go there,” that is exactly what I want to do.”

Through our conversation, Conover explained the inspiration behind the series, talked about working for the former president, discussed the ways COVID completely changed the production, and shed light on what it was like to sit down, roll cameras, and talk shop over peanut butter and jelly sandwiches with Barack. [Spoiler: It was awesome.]

Aaron Pruner for LAMag: How did you get involved with the project?

Adam Conover: The genesis of it is that the Obama company Higher Ground had optioned the Michael Lewis book, “The Fifth Risk,” which is a wonderfully reported book about the Trump transition. It also has all these fascinating details about how the government works. They were looking to make a show about it, but they needed somebody with a pitch and an angle. I had read the book and loved it. So when I got a call about it, I jumped at the chance. I went in, and I told them, “Hey, here’s how I would handle it using my signature blends of comedy and research and information and investigation.” They loved that idea. And we went with it.

How did the pandemic change the subject matter you were exploring on the show?

It changed everything about the show. We were in our writers room for one week and then the COVID shutdown happened. The first week the comedy writers were in the room, that Wednesday was the day that the NBA announced that they were suspending their season. I remember it was a Wednesday like it was a clear, shocking moment. I think for a lot of us, that was the “oh crap, this is getting real” moment.

We were realizing, okay, this is one of the biggest events of our lifetime. This is a September 11 size change in American society. We can’t make the same show now that we live in this new reality. There are a couple of episodes that are the same as they would have been if COVID had never happened: we had already talked about doing a food episode, a weather episode, and a money episode. But, we started changing our topics in order to address the world that we were now living in.

So, in the money episode, we talked a lot about COVID relief and how inequitable that relief was. We realized we needed to do an entire episode on disease, which is not entirely about COVID, but also about the work that the NIH does, and what the CDC has done to eradicate other diseases that are trying to kill us all in the name of protecting the American public, which is the government’s job. But we also had to talk about the government’s failure to protect us from COVID. There was no way we could have done a show about the government without covering that. So it was a quick pivot that I’m really happy paid off.

You also explore the successes of failures of both political parties, including the choices made in the Obama administration. Was that a tricky road to walk?

First of all, our partners at Higher Ground were very on board with that angle. There were some segments that I had to advocate for. We knew going in that we were going to be criticizing the policies of both Republican and Democratic administrations. When I make a television show, part of what I want to do is make sure that whatever the audience is thinking we can’t do, whenever they’re thinking, “Oh, they’ll never be able to go there,” that is exactly what I want to do.

We did an entire segment on drone strikes, which is something that, if Barack Obama had been writing the show, I don’t think he would have had that topic. But that came out of our writers room. This is a really fascinating topic and we needed to do it. We fought for it, and we did it. Twice, over the course of us writing the show, we had a phone call with the former president where he read the scripts and shared his thoughts. And on that one, he said, Well, here’s how I see it and it’s somewhat different from the way you see it. And I said, Well, I’m afraid, sir, that we’re gonna have to agree to disagree. That was a division that they respected. And as a result, we got to do some really fascinating stuff on the show that I’m very proud of.

Talk to me about traveling all over to do different government jobs, firsthand. How was that experience and was that something you always wanted to do?

One of the things I wanted to do was to go out into the field and see these things for myself. Adam Ruins Everything was always telling you about the world. But there are other things that you really can’t understand unless you go through them firsthand.

Off the top of your head, what is a government job that surprised you?

I didn’t know about this until we started researching the show, but every single time a hurricane is coming through the Atlantic, and you turn on The Weather Channel and it says what the hurricane is and where the hurricane is going, the only reason they even have that image, is because at the moment you’re watching it, there is a plane full of Americans from either NOAA (The National Oceanic and Atmospheric Administration) or the Air Force, flying back and forth through the hurricane over and over again.

I grew up knowing about hurricanes. But, I was like, How did I watch the Weather Channel for 30 years of my life and never notice that? There are literally people flying through it. We asked to go see it. We asked to do it. I wanted to experience it.

Wait … you asked to fly directly into a hurricane?

That’s the only way to get to it viscerally. Everything you’re seeing there is real. It was just me, a camera person, a sound guy, and a producer. And we just went up and did it. It was crazy. I couldn’t do anything but just react to what was happening. It was such a strange situation to be in. It was terrifying. It was exciting. It was everything you would expect.

Are there any other political figures, aside from Barack Obama, that you would like to eat peanut butter and jelly sandwiches with?

Honestly, I think if you have peanut butter and jelly sandwiches with any political figure, you will get some good stories out of them. I think everyone loves peanut butter and jelly. It disarms people, it brings out their inner child and accesses their deeper selves. So, anybody from Biden to Trump, or DeSantis, whoever would sit down and have a peanut butter and jelly sandwich with me. I think that might be a good way to get at the truth. If they’re willing to sit down and have a hard conversation like President Obama [did with me] over a sandwich, then I think we could get a good segment out of it. I’d happily do it.

I’ve not had any conversations with Netflix about this, so if they want to do another season, I would happily do it. But on the other hand, it seems to me that we’re very much in a place in the industry where what people want are limited series. So, that’s the case with this. One of my goals in my career is to show how comedy documentary is not just Adam Ruins Everything. It’s a whole format that can have a bigger life that can explore all sorts of different issues. What I’m excited about is doing another show like this, perhaps about a different topic, where I get to travel around the world and bring fascinating stories to people. I can use comedy to share perspectives and facts that they never would have heard before. That’s what really wakes me up in the morning. It’s my personal mission as an artist. And whether or not we do more episodes of this show, I’m going to keep doing that.

The G Word with Adam Conover premieres Thursday, May 19 on Netflix.