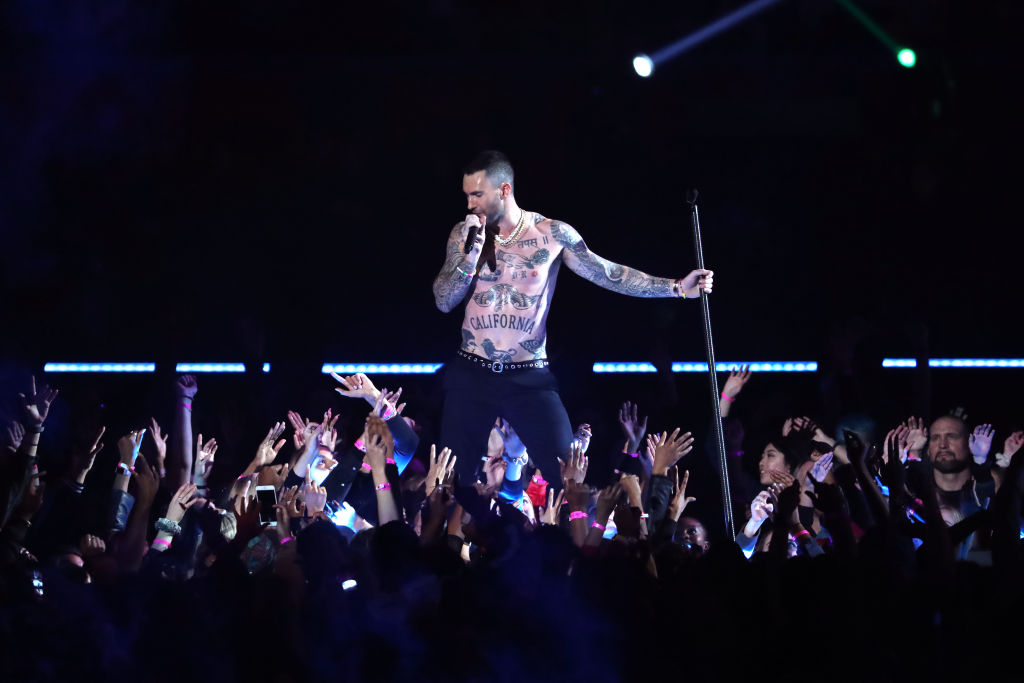 Adam Levine is a man of many tattoos, as millions of Super Bowl viewers may have glimpsed during the half-time performance of his band Maroon 5, even if they had said performance on mute, which may have been the best way to experience it. Among those tattoos are several tributes to his status as a lifelong Angeleno.

While he’s no Soundcloud rapper, he’s got a decent coverage of work, collected at various points in his life, and as Levine once told Cosmopolitan, the meaning behind his tattoos goes pretty deep.

That he was forced to be not-naked for several entire minutes, might explain why he was unable make it through the half-time show without stripping off multiple layers of clothing. Though in Atlanta, he was simply trying to return to his natural, California state of nudity.

As he removed his garments, viewers were given ample time to observe his numerous works of body art, including a script-font “Los Angeles” tattoo that appears on his shoulder. It is a reference to the fact that Levine is, in fact, from Los Angeles, making him a rare and special unicorn.

“Simple case of hometown love. Not many people were born and raised in L.A. Gotta wear that badge of pride,” Levine told People, when they named him the “Sexiest Man Alive” in 2013 (because that’s apparently a thing they’re still doing).

A more recent a recent addition is an arched text banner across his stomach, similar in placement and design to Tupac Shakur’s iconic “THUG LIFE” tattoo, except Levine’s just says “California.”

Mark Hoppus of Blink-182, himself a local resident, had a theory of his own about the inspiration behind Levine’s new ink. Perhaps it is a reference to the pop-punk band’s 2016 album, California.

Pretty dope that Adam Levine is such a huge blink-182 fan he has CALIFORNIA tattooed across his stomach!!

Levine has not directly responded to Hoppus’ explanation of the design, so we’re just going to assume it’s totally correct.

Maroon 5 opted to take on the Super Bowl gig despite intense controversy surrounding the NFL. Had he peeled off his sweaty tank top to reveal a portrait of Colin Kaepernick, we might have been more impressed.

Estevan Oriol and Mister Cartoon, a Pair of L.A. Originals, Tell Their Story