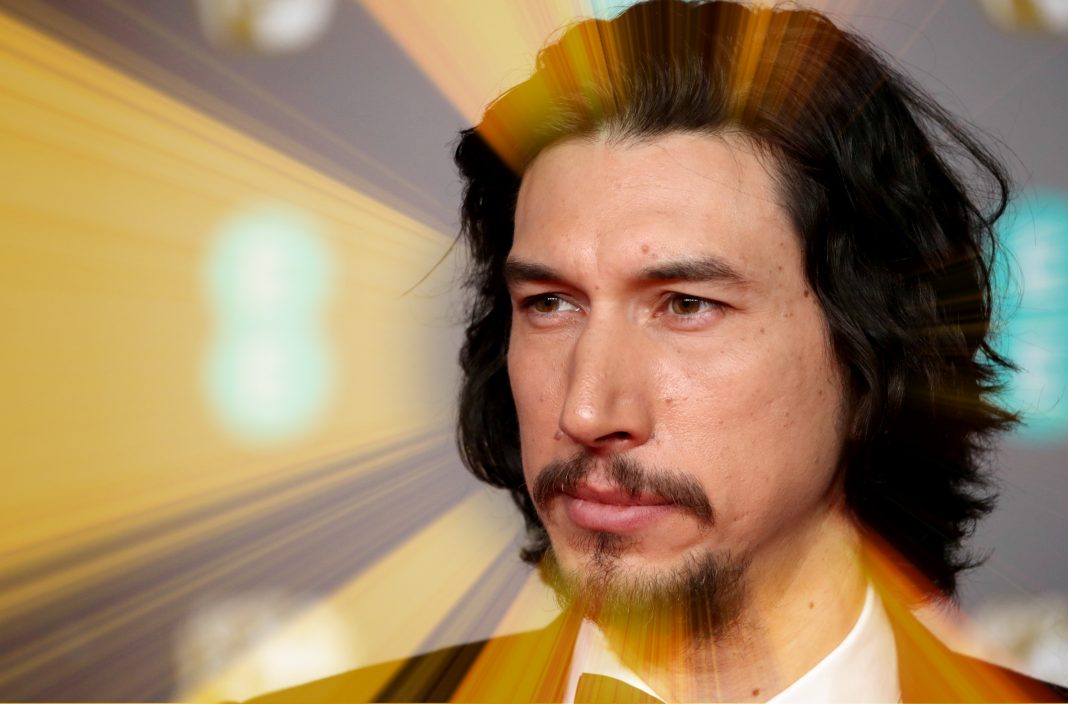 Earlier this week, I was idling at the intersection of Adam Driver Face, Adam Driver Face, and Adam Driver Face, where posters advertising Marriage Story, Star Wars, and The Report, cast shadows over a sleepy corner of the San Fernando Valley. Gazing up at his guileless pasty pancake, mix-matched features that animate on screen as though aroused from torpor like those falling frozen iguanas left to thaw out in the sun, I contemplated peak Adam Driver Face season. ADF is the face of, if not his generation, then the face of a generation of males. No! It is more than that. It’s a transgressive cubist work of art that defies and challenges us to redefine traditional maleness.

Like contemplating your first Pollack or witnessing John Cage’s 4’33”, I had no context with which to understand what ADF was asking of us.

Having been conditioned to normative TV boyfriend types though shows like Sex and the City, I could recognize easily identifiable and relatable models, like Lovable Nebbish Harry Greenblatt, expertly portrayed by Evan Handler, who ingratiated his way into Charlottes life; or John Corbett’s lumbersexual Nice Guy, Aiden, who wafted into Carrie’s life like a warm Gulf breeze. And then there was Sexy Asshole Mr. Big, played by Chris Noth. He bestrode Carrie’s narrow studio apartment like a colossus, and now, here was Hannah’s…something, flopping around like Jello, less man than mold infestation.

I assumed this was some amateurish stunt casting. Squinty eyed, this zygote of faces refused to telegraph the reliable range of known expressions. Likable? Detestable? I. Did. Not. Know. If Adam Driver Face were weather it would be cloudy with a good chance of flash flooding. Or light precipitation. How could we know? Who among us could interpret the mystery of ADF, which exuded both powerful rigidity and Gumby-like pliancy. Slowly, I came to understand the deliberateness of its alien inscrutability and that Adam Driver Face’s lack of artifice and absence of performative maleness constituted a rage against the Resting Movie Star Face machine.

Consider one of the master manipulators of Resting Movie Star Face. No one achieves RMSF more easily than Tom Cruise, following in footsteps of the chiseled-featured great ones, Gable and Peck, and Brando before he became (a) heavy. Hours of screen time serve as proof that it’s a fool’s errand to try and photograph Cruise from a bad angle. Even in repose, he has an impossibly handsome Resting Movie Star Face. Other RMSF archetypes include: The Everyman as rendered by brilliant talents like Tom Hanks and Matt Damon; The Cool Operator like Will Smith, whose every pore radiates “look at me” movie-star mega-wattage. I was planning to include Idris Elba as an example of Sexiest Man Alive Face face, but I sat through Cats and I can never unsee the image of his impish, furry, neutered nakedness.

Jonathan Pryce, perhaps best characterized as a character actor than a movie star, blesses us with his gorgeously lived-in root vegetable face as Wise White-Guy Elder.

As a fictional director in Once Upon a Time in Hollywood notes, Leonardo DiCaprio is our “evil sexy Hamlet.” With those piercing baby blues, he serves up a twist to his reliable RMSF, with his Devilishly Handsome Haunted Movie Star Face.

Each time charismatic oddball Joaquin Phoenix’s face appears on screen, it’s as if a voice whispers, “Keeping movies weird since 1984.” He’s our cunning Trickster whose stark yet smeary features slide into focus and are still somehow out of focus.

You may be asking yourself: Is it essential to take time out from the winter of our country’s discontent to praise Adam Driver Face? On the one hand, we have a President invoking the trope of “perfect casting” for “his” military generals, who characterizes female political rivals as not presidential looking, and touts his military prowess and Heartland cred, despite being a draft dodger from New York City. On the other, audiences have accepted a former Marine, schooled in the Heartland, noggin like a Mr. Potato Head, as a bona fide movie star. If Adam Driver Face can disrupt our expectations of what a movie star looks like, then perhaps we can finally retire the antiquated notion of who looks presidential enough to be our next leader.

This year, the Academy failed to honor many great performances by actors of color, but it did have the good sense to nominate ADF. And, if ADF wins, the Face might just break into a smile, which Driver characterized on SNL as being like a “kidnapped person trying to send a message with my eyes.” And in that moment, he’ll be voicing the sentiment of so many of citizens.

“Help us, we’re being held hostage by a corrupt and dangerous patriarchy and we’d like to be rescued, please.”

Then, will the rise of ADF be complete? Maybe. Still, will we ever hear Adam Driver Face utter those three magic words that have signaled masculinity on screen since 1962: “Bond, James Bond”? Only time will tell.

Annabelle Gurwitch is the New York Times bestselling author of I See You Made an Effort, among other titles. She is empty-nesting in Hollywood Adjacent. @annabelgurwitch.

RELATED: Adam Driver Flees ‘Fresh Air’ Interview at the Sound of His Own Voice