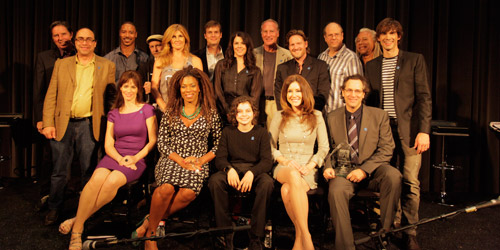 Guests enjoyed hors d’oeuvres and cocktails while bidding in the silent auction, which had items like tickets to the “Burlesque” premiere, tickets to a taping of the show Hot in Cleveland, a pair of Lamar Odom’s basketball shoes, a script of Entourage signed by Jeremy Piven, and a meet-and-greet with Justin Bieber (which had the highest starting bid of $5,000 but, alas, no bids) up for grabs. Most items received bids between $100 and $400. Perhaps the items were a little too commonplace for the Industry crowd.

After the auction, guests were led into CAA’s theater where representatives from Autism Speaks recognized Parenthood executive producer Jason Katims for raising autism awareness by addressing the disorder on his NBC show.  Katims thanked his son, who was diagnosed with Asperger’s as a child, for inspiring him. Then the audience was in for a treat: Parenthood castmembers, along with Connie Britton and Lorrainne Toussaint, read funny and moving excerpts from The Lion King and pieces by Wanda Sykes and other authors about the challenges and rewards of parenting. It was exciting to see the professionals at work in such a cozy and casual setting. They let loose and cracked themselves—and us—up. The lady next to me was laughing so hard she was snorting. Her daughter was so embarrassed—but for a great cause.