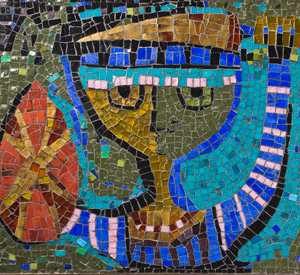 Evelyn and Jerome Ackerman were beaming with delight and surrounded by well wishers at the opening of their exhibit, A Marriage of Craft and Design, at the Craft and Folk Art museum last week. The two designers were married over sixty years ago and have been producing their exuberant and colorful brand of whimsical modernism for just as long. The top-floor show includes original geometric and figural tapestries, sculpture, carvings, architectural pieces and even a children’s finger puppet set created by the couple when their daughter was a young girl. The Ackerman’s participated in every edition of the landmark California Design shows that ran in Pasadena from 1954-1976. Their designs were showcased alongside Charles and Ray Eames, Architectural Pottery, and the sculptures of Peter Voulkos. They have lived in the same Culver City home for over 50 years and the 21st century is grateful they retained samples of most of their work produced under the names Jenev and ERA Designs. Some of the highly collected pieces on display now were lent by dealers like Fat Chance on La Brea. Their work is in the permanent collection of LACMA and the Smithsonian Institution but this is the first time it’s been presented together in Los Angeles. In the last couple of years they have been presented with the Henry award from the Museum of California Design, featured prominently in books and articles on California modernism, and now this huge retrospective on their work. I thought being married for six decades was a big achievement.