Home Music Acclaimed Pianist Stephen Hough Has Recorded Over 50 Albums, and That Might... 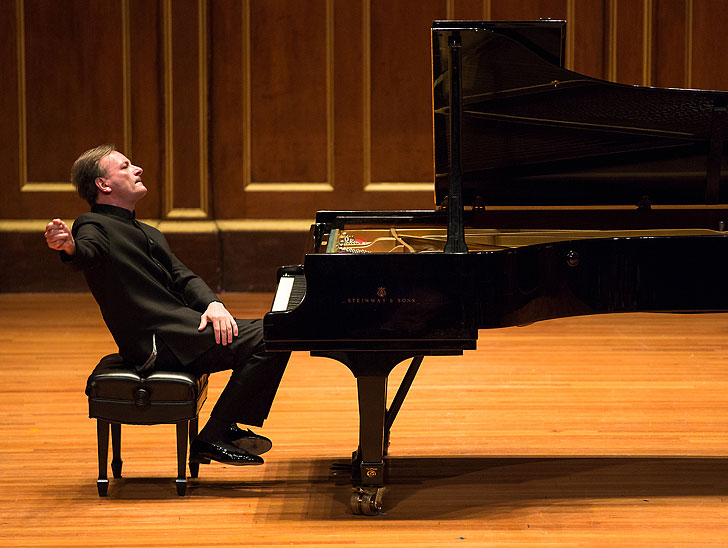 What makes a Renaissance man? Traditionally it’s someone who excels in multiple disciplines. Perhaps a person who has written over 600 columns for a newspaper; who is a successful painter; who’s finishing his first novel; who’s composed works have been recorded and played around the world; who, in the first six months of this year alone, will be touring with six different concertos? By that definition, pianist Stephen Hough certainly fits the bill. Friday marks the first of his three performances of Liszt’s Piano Concerto No. 1 with the Los Angeles Philharmonic.

“I’m certainly not Leonardo da Vinci,” says Hough. “These titles make me rather embarrassed. There are different levels of commitment. Painting I do for fun. Composition is a central part of my life—that’s as important as playing. Writing words has always been as important since I was a kid.”

Hough is easily one of the most acclaimed pianists of his generation. He has recorded over 50 albums, yielding numerous Gramophone Awards and several Grammy nominations. His solo concerts regularly sell out, as do his appearances with orchestras all over the world.

He says that having six different concertos ready in a year is not uncommon for a touring pianist. “It depends really,” he explains. “I suppose six is about average to have on the go at any one time. Right now I finished with the Dvořák and the Schumann. I just have my summer repertoire and the Brahms 2nd Piano Concerto, which is like two concertos in itself. With recital programs, I keep one program for the whole season. I’m trying to play less repertoire to allow myself more time to write and not to feel so totally stressed at one time.”

Hough clearly enjoys playing the Liszt concerto. “Liszt writes beautifully for the piano,” he says. “I was playing the Dvorak with Cleveland last month. That sounds much easier than the Liszt and is ten times more difficult to play because Dvořák didn’t play the piano and everything is in the wrong place. The geography is good with Liszt. It’s short. It’s 20 minutes, but you have to create a sense of drama. When you play Liszt, you have to walk in his footsteps, and there has to be a sense of occasion with it. It’s not just playing the notes but creating the drama.”

To have the kind of career and the longevity that Hough has had requires more than simply creating drama. He says you have to also have “the ability to be on fire” every time you perform. “You could have played Beethoven’s Emperor Concerto for 50 years, and you play it in your 51st year, and you’re trembling with excitement and passion all over again,” he says. “Any suggestion that you are bored with a piece, then you are in the wrong job. So far I’ve never been bored on stage playing a piece. I hope that remains the same for me. Genuine originality will come naturally if you are in love with the music. You will have something new to say without having to search in a self-conscious way.”

That excitement allows for a greater intimacy with concertgoers. “One thing that does strike me when I’m playing is the connection with the audience,” he says. “If life is great and you are happy and sunny, you might not be that interested in music. When things are perplexing and you are going through a difficult patch, that’s when music has an impact. When I’m playing these great works, it’s almost like being a priest or rabbi. You are going with the music inside people’s souls. You are dealing with areas of human life you can’t put your finger on. I love that there are no words. When I’m on that stage, it doesn’t matter. We can share something of what it means to be on this planet at this time.”