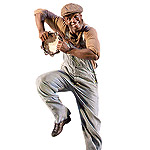 Forty years of shows from composer John Kander and lyricist Fred Ebb culminated in 2010’s The Scottsboro Boys, which opens at the Ahmanson Theatre on May 21. Using minstrelsy to tell the true story of nine black men falsely accused of rape, the bawdy satire marks the final act in a career that courted controversy.

Cabaret
(1966)
Inside a seedy Berlin nightclub two lost souls resist the rise of Nazism. During one number, an emcee tap-dances with a gorilla to skewer anti-Semitism.

Chicago
(1975)
The vampy Bob Fosse showpiece borrows from vaudeville to wink at Prohibition-era corruption, jaundiced journalism, and a celebrity murderess.

Kiss of the Spider Woman
(1993)
In this surrealist drama a gay inmate in a Latin American prison dreams of a B-movie femme fatale who kills her victims with a kiss.