Home Uncategorized “Absolutely Anything” Reunites (Some Of) Monty Python 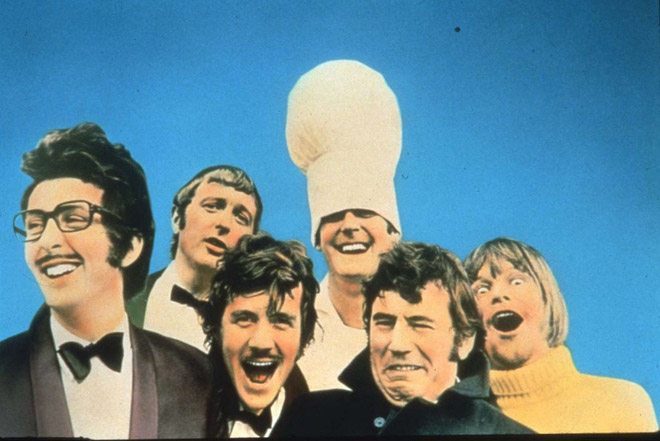 Robin Williams has taken on a lot of peculiar roles during his career (Teddy Roosevelt, Patch Adams, mad scientist in Flubber, Aladdin’s Genie) and performed with a nutty bunch of co-stars, but his latest project might take the cake: He’ll be playing a talking dog alongside three original members of Monty Python. That’s right, the absurdist, surreal minds (or at least some of them) that brought you dead parrots, mere flesh wounds, cheese stores with no cheese, and Hell’s Grannies are back. They’ll return in Absolutely Anything, a sci-fi farce that will feature O.G. Flying Circus members Michael Palin, John Cleese, and Terry Gilliam—with Terry Jones directing them. Mike Medavoy is set to produce the pic, which, according to Jones, is not a Monty Python movie, although it has a similar sensibility.

Even though Jones has said it’s not a Python pic, it’s hard for fans not to hope. The Pythons will play a group of aliens who endow an earthling—from the sounds of it, a teacher—with powers to do absolutely anything. Williams plays a dog that knows all about the chaos at hand. Expect Flying Circus-esque antics, random gags, and lots of elbowroom for the signature non-sequiturs that once graced the BBC. Though no hard-and-fast release date has been announced, the CGI-heavy flick is in pre-production.

Absolutely Anything was announced last January, and a few updates – casting, production status) have popped up here and there, so expect for more nitty gritty details. Until then, we play the waiting game. Or watch the Graham Chapman biopic, A Liar’s Autobiography. Or resort to YouTube in painful anticipation.