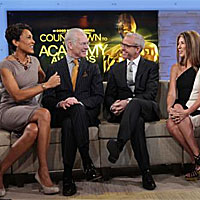 Today ABC announced that the hosts for the 84th Academy Awards red carpet will be Robin Roberts, Tim Gunn, Jess Cagle, Nina Garcia, and Louise Roe. Roberts will be on the main pre-show stage while Gunn and Garcia will be together on the carpet interviewing celebrities and giving fashion commentary. Roe will catch everyone as they show up to the Kodak Theatre. Cagle will be backstage with behind-the-scene interviews as presenters and winners come and go from the stage.

Garcia and Gunn might have celebrities thinking twice about their designer looks for the night.