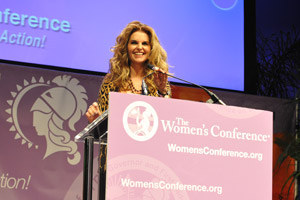 Sure, we were all mostly on a first name basis (Maria, Michelle, Laura, Goldie, Oprah, Suze to name a few) and yes, there was a lot of talking about our relationships. Hell, we even moaned about gaining weight. But The Women’s Conference was nothing like a girl’s night out.

This year, around 30,000 women (and very few good men) filled the arena, meeting spaces, and ballrooms of the Long Beach Convention Center for Governor Schwarzenegger and First Lady of California Maria Shriver’s annual three-day event featuring over 160 speakers on dozens of topics, book signings, a large marketplace, an award show, and more. According to organizers, this year’s conference was the largest of its kind in the world.

I attended the last day of the event, and while the experience met many of my expectations (traffic was awful, parking was full, it was rewarding to take time out to think and talk about the issues facing women today, and dark skirt suits are decidedly in) one thing did truly surprise me: how often the idea of letting go came up. “Let go of fear,” said Goldie Hawn during a discussion about happiness. “I’m going to do the one thing I’ve never done before,” said Shriver about her post-term plans. “I’m going to let go.” It was refreshing if unexpected advice from a group of women who seem to have and want and do it all, women who appear to be utterly in control of the many responsibilities they juggle so famously.

Late that the afternoon, Meg Whitman and Jerry Brown sat down with Schwarzenegger and Matt Lauer for a discussion titled “Who We Are, Where We Are Going.” For a time, Whitman and Brown went back and forth and forth and back answering the usual questions about their politics and personal solutions for our troubled state. Finally, Lauer thrilled the crowd by asking both candidates to agree to pull all negative ads for the remainder of the race. Brown tried to dodge the challenge, got booed, then, feeling the heat, agreed to pull his negative ads on the condition that Whitman would do the same with hers. But Whitman just sat there, her lips pursed and mind racing, before ultimately refusing to strike the deal. It was discouraging and manipulative. Everybody booed all over again. Someone yelled out “Lauer for Governor!” Regardless of the outcome of yesterday’s midterm election, wouldn’t it have been nice if they could have both just let it go?