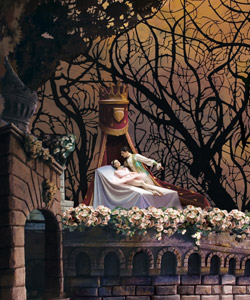 In its 70th anniversary year it’s no wonder that American Ballet Theatre knows how to cast a spell—the good kind, that is. During its recent staging of The Sleeping Beauty at the Music Center’s Dorothy Chandler Pavilion, the title character was not the only one affected by the evening’s events. The audience seemed equally mesmerized by the brilliant costumes, the elaborate sets, the classical choreography, the pyrotechnics (yes, that’s right), and the Tchaikovsky score (a favorite thanks to Disney’s reimagining of the fairy tale).

The biggest treat, though, was Daniil Simkin’s brief turn as the Bluebird in the final act. Ladies and gentlemen, he is one to watch. This young dancer’s spirited leaps and fine technique brought to mind a stunning solo Baryshnikov once performed in Le Corsaire. Here was true talent on display again—in an aquamarine blue outfit and looking like a feathered creature, no less—and the audience recognized it, whooping and cheering and applauding at length. It’s only a matter of time, you’d think, before Simkin, who was born into a ballet family, becomes a principal with the company.

The Sleeping Beauty was originally choreographed by Marius Petipa and performed in 1890. More than a century later (in 2007) ABT debuted this version, with Gelsey Kirkland (a onetime Princess Aurora/Sleeping Beauty herself) assisting with the choreography. Is that why the steps were so intricate, the movements so difficult, the feats of balance on pointe so breathtaking? Whatever the reason, several performers struggled on opening night—small glitches that were, in the end, forgivable when you consider the body blows the dancers were enduring.

Outstanding performances, of course, could be found in Gillian Murphy as the lead, Marcelo Gomes as her Prince, and Michele Wiles as the Lilac Fairy who orchestrates the magical kiss that awakens Sleeping Beauty and the rest of the kingdom. Murphy, especially, brought an energy and vitality to her role. As for the pyrotechnics? Ah yes, just your ordinary red fireball, thunderclap, and smoke when the evil fairy, Carabbosse, would appear and vanish. This Broadway-meets-ballet effect was such an unexpected thrill that the audience buzzed, delighted. In an instant we, too, had become spellbound and captivated. And that was the whole point.