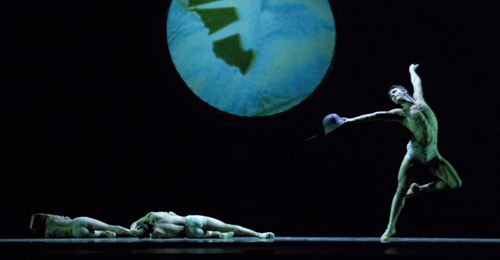 When they heard that The Fiddle and the Drum, a carefully crafted collaboration between the Alberta Ballet and Canadian singer-songwriter Joni Mitchell, was playing at Royce Hall at the end of February, neither could resist. Marissa, a dancer-journalist, and Natasha, a self-proclaimed poet-reporter and Mitchell fan entered the theater for different reasons. Both left inspired.

Joni Mitchell’s eclectic melodies and insightful lyrics have captivated me since I first heard “California,” a song that always makes me homesick when I’m abroad. That Friday, Mitchell’s work evoked a new longing in me, a longing for change. The Fiddle and the Drum combines ballet with Mitchell’s music and artwork. Mitchell, who has said “I’m a painter first, and a musician second,” has been painting all her life, but this was her first opportunity to combine her talents in a multimedia show—and the timing works: Although most of the songs featured in the production were written in the 1960s and 70s, they still resonate today. We are at war, afterall.

The Fiddle and the Drum takes its title from the anti-war song of the same title, but I found the performance of “Shine,” which asks us to “let our little light shine…on bombs exploding half a mile away” more moving: A young girl resembling Mitchell and representing hope takes the stage as vivid green paintings of cadavers, soldiers, and leaves are projected in background. Her voice tangled with a saxophone, Mitchell cries, “Wouldn’t they like their peace?” “We have it,” she answers back. “We just get bored.” In another scene, a couch potato takes the stage in sweats to watch TV as “The Reoccuring Dream” criticizes consumerism and mass marketing.

Together, the music and art of The Fiddle and the Drum protest our war-hungry, consumer-driven world. It’s not the 60s, but Mitchell’s still right: We’ve got work to do.

To be honest, I wasn’t familiar with the Alberta Ballet before The Fiddle and the Drum. The ballet’s artistic director, Jean Grand-Maître, served as choreography director of the 2010 Winter Olympics’ opening and closing ceremonies, though, so I knew walking into Royce Hall that he and his dancers had something special to offer. They proved me right.

The Fiddle and the Drum opens with a sole figure stepping out from darkness into a pool of light, his every muscle boldly outlined in green paint. A line of dancers slowly file into line behind him, then dance as one unified company, as a people sharing a common goal. At Royce they executed their powerful ensemble work, explosive at times, more delicate at others, in perfect unison, their attitude promenades some of the best I’ve ever seen, their penchées en pointe hitting 180-degrees with ease. Diving fearlessly into difficult lifts that had them spinning high above ground, the women depicted the risk-taking and trust involved in human relationships, one of the fundamental themes of the work.

The ballet’s fluid choreography synced beautifully with Mitchell’s music. She has a way of getting her anti-war politics across without screaming, and the dancers resisted overdramatizing gestures of angst and anger. Instead, the production set a reflective tone with subtle movements, thoughtful spatial patterns, and minimalist props, like army helmets and waving flags, the dance itself a powerful, beautiful protest. As the young Joni frolicked alongside the company, I remembered how much innocence we have yet to lose.

In the show’s closing, the dancers yelp and cheer to “Big Yellow Taxi” while performing a mishmash of popping and locking, grand allégro, and jazz tricks. The show ends on an optimistic note, leaving the audience to ponder another theme of the night: You don’t know what you’ve got till it’s gone.