Home Uncategorized A Q&A with Aaron Short of The Naked And Famous, Who Play... 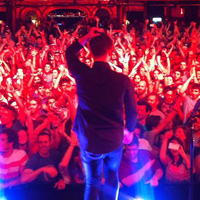 With the release of the debut album Passive Me, Aggressive You in 2011, New Zealand’s The Naked And Famous nestled into our brains, leaving us humming their breakthrough single, “Young Blood.” Now the Auckland quintet has relocated to Los Angeles and released In Rolling Waves, a weightier, more layered album that proves they’re more than a catchy one-hit-wonder.

Keyboardist Aaron Short spoke with us about headlining the Wiltern, finding a sound beyond a hit single, and trading Auckland for Laurel Canyon.

Headlining the Wiltern is sort of a milestone, especially now that you’re based in Los Angeles.
We were just there over a month ago to see Foals play. We were standing up in the audience looking up at the stage and saying, “Oh, shit. We have to be up there in a month.” It’s a strange feeling, but it’s great. We were really looking forward to it.

What made you decide to move from Auckland to Los Angeles?
By the time we finished up last year’s touring, we’d done three U.S. tours. There was quite a lot going on and we wanted to look for a place to sit down and write the next record. Initially, we’d looked at a couple other places like London and New York, but I think L.A. was kind of special. It felt a little familiar to us; everything’s quite spread out and you’re always near the beach. The other upside was that it’s pretty much one flight away from anywhere we want to go. 12 hours to New Zealand, 10 hours to London. It’s sort of the perfect place for us.

How do you like it so far?
It’s a pretty cool place. We had to decide whether we wanted to split up into individual houses or make a stationary tour bus out of a house and continue to all pile in under one roof, and that’s what we ended up doing. We have a five-bedroom house in Laurel Canyon and we’ve lived there over the past year. There’s so much history and culture and community hiding out in the Laurel Canyon area. It’s also a bit of an introverted experience for us, being tucked away in the hills there. It provided a nice, quiet retreat for us to do our thing, as opposed to being in the middle of Hollywood. We’ve also spent some time in Echo Park—completely different flavor, different feel, and scenery. There’s so much cool music stuff going on there. It’s nice that we can walk out our front door and walk to our local café or bar or show.

Did you write the new album from the road or once you’d settled in L.A.?
Both. In Rolling Waves was a mix of fresh ideas formed since we’ve been in L.A. and slowly formed over two or three years of touring. Most of the time on tour, you’re normally so busy and tired, but we couldn’t help but be in a creative state of mind, so it was kind of the opposite for us. Before we got here, we had about half of the demos for the new album, they just needed a lot of producing and structuring.

Everyone knows the single “Young Blood,” but fewer people know The Naked And Famous. How did that impact you heading into the new album?
We were always keeping the “Young Blood” thing in the back of our mind. We didn’t want to just go and put out a second album where all of a sudden every follower we’ve gained over the past few years hears it and goes, “Whoa, what? This is totally different.” We wanted to figure out what worked for us on the first record and evolve things.

In Rolling Waves is a little darker than your first record. How did that feel come about?
Trent Reznor has always been an inspiration for us, especially on the production side of things. It’s not so much of a direct influence on us anymore, but we can definitely look back and see it. We were careful to take a less-is-more approach this time. We wanted to focus on the core writing of the tracks to make them sound good rather than putting five things on top of each other because it sounds fun. Maturing is the right way to describe it. When we did Passive Me, Aggressive You, we were very fresh as a live band. It’s been three years now, and we’ve done an awful lot of live touring.

How has the album been received at home?
It’s gone pretty well. They had the release four or five days earlier than the rest, so it was interesting to be in a country where the album wasn’t out yet but reading the tweets from Australia and New Zealand and seeing everyone get excited. We’ll be down there for the Big Day Out festival in January. It’ll be such a blast to play there.

What’s your favorite festival memory from the last three years on the road?
For me, personally, Glastonbury 2011. I’d never done the Glastonbury but people had spoken so highly of it. I thought, “Oh, it’ll just be another festival,” but no, it really was quite special. Our actual show didn’t all go according to plan, but after, once we’d all had a moment to chill out, we got to see Radiohead. They were the secret band for the night. Just after Radiohead, Caribou performed on the same stage. We’re really big fans of both. It was one of those moments where the rain was coming down a bit, it was late at night, everyone was covered in mud, the sound and the lights were perfect. There was something about it that was quite special.