Home Uncategorized A Pryor’s Tale: A New Biography Reveals Richard Pryor in All His... 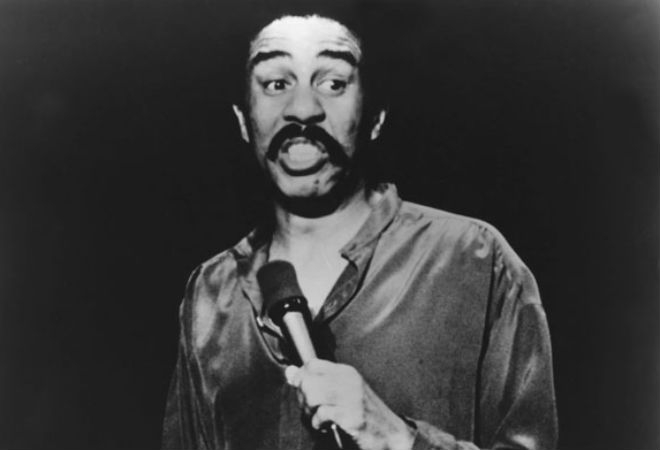 Richard Pryor could simultaneously confess, contemplate, and protest, keeping us doubled over with laughter even as he subverted the order of things. In the biography Furious Cool: Richard Pryor and the World That Made Him, David and Joe Henry hurtle into the life and the psyche of a man who altered how we understood comedy, and, when he was absolutely on, race in America.

When the brothers (David is a screenwriter, Joe is a musician) began writing about the comedian a decade ago, initially for a screenplay, Pryor was still among the living. Joe Henry told one version of Pryor’s story in the opening track of his 2001 album Scar, a melancholy 6:22 excursion (with accompaniment by saxophonist Ornette Coleman) entitled “Richard Pryor Addresses a Tearful Nation.”

The Henrys offer up another version of Pryor’s tale early in Furious Cool:

Richard Pryor’s gift was Truth. He turned a gritty corner one day as a young man in Peoria, Illinois, and the Truth was on him like a feral alley cat. And he held on to this cat; made a coat out of it and wore it to New York; hid his secret heart underneath it and opened it like a curtain onstage; wore it when he read Malcolm X, scrapped with Huey P. Newton; when he got high with Miles, sparred with Ali, and went down on Pam Grier. Then he tried to pretend he’d never seen it before . . . swore he didn’t know whose coat it was; gifted it to girlfriends who all threw it back in his face. When he married up with a freebase pipe, he and his glass bride huddled under that coat for days on end. It kept in the vapors and blocked out the sun until, angry and tired, beset by demons and filled with self-loathing, he doused himself with rum and lit the fuse, melting that animal spirit deep into his own. He tried to swear it off, but by then Truth had gotten under his skin, was a part of him, even if he couldn’t live up to its message.

The motto of Thomas Pynchon’s jazz musician McClintic Sphere could also have been Pryor’s: “Keep cool, but care.” Pryor’s acute vulnerability and sensitivity set the comedian apart from his contemporaries even as he studied and borrowed from crossover king Bill Cosby, Harlem luminary Redd Foxx, and loquacious firebrand Lenny Bruce. It would be enough if Furious Cool was a profile of Pryor’s uncanny talents, psychic turmoil, and ungovernable behavior, but it’s also a fascinating history of black comedy.

Even while competing with CD/DVD box sets, tributes, and documentaries like the recent Richard Pryor: Omit The Logic, Furious Cool captures Pryor’s frenetic routines and stage presence on the page. Referencing Pryor throughout the book as “Richard,” the Henrys evoke an intimacy with the subject in a book that isn’t “a definitive cradle-to-grave biography” but a map of “the cultural landscape from which he emerged.” The Henrys mention a theatrical skit by Dusty Fletcher later turned into the ubiquitous song “Open the Door, Richard”; theirs is the story of how one Richard opened the door. They show us his stations of the cross: Pryor’s onstage breakdown when he walked out of his Aladdin Hotel gig in Vegas in 1967; his consciousness-raising hegiras to Berkeley in 1971 and Africa in 1979; his tirade at a gay rights benefit at the Hollywood Bowl in September of 1977; the apotheosis of his Live in Concert film in 1979; and his infamous narcotic self-immolation on July 9, 1980. Like its subject, the book becomes a bit unmoored after Pryor’s emergence from the flames, and the final set of chapters are perhaps too freewheeling with loose anecdotes and quotations.

The two women who emerge most vividly from the book are not any of Pryor’s five wives, but Mitzi Shore, whose Comedy Store played a vital role in Pryor’s life and career, and Penelope Spheeris, who as a young UCLA grad directed Pryor in Uncle Tom’s Fairy Tales, a lost late ‘60s film project. The book spends time with Pryor’s forays into film and television. Outside of his concert films, according to the Henrys, Paul Schrader’s Blue Collar features “far and away Richard’s finest performance as an actor and the purest Pryor to be found onscreen.” As for his post-1987 film career, which included See No Evil, Hear No Evil, Harlem Nights, and Another You, they write, “We never believed that Paul McCartney died in a 1966 car wreck or that Elvis staged his own death in 1977 to live a life of obscurity in northern Michigan, but we can say with fair certainty that the hapless actor passing himself off as Richard Pryor in these movies was an impostor.” After being the first black host of Saturday Night Live (with musical guest Gil Scott-Heron—and a five-second delay), he created The Richard Pryor Show less than two years later. Although the First Black President sketch stays with us, the Henrys proclaim A Pet Head, in which Pryor reveals what’s in his dressing room, “perhaps the strangest, most subversive thing ever aired on network TV.”

One of Richard’s eyes peers out from the spine of Furious Cool, engaging in some reckless eyeballing of anyone who pulls the book from the shelf. Hilton Als opined in his 1999 New Yorker essay on Pryor (also in his new collection White Girls) that each of Pryor’s attributes as a comedian could be found scattered among many comedians who came after him. Look and listen to the rawness of Eddie Murphy, the glee of Whoopi Goldberg, the confessions of Louis C.K., the mania of Katt Williams, and the trenchant observations of Dave Chappelle or read the work of novelists like Walter Mosley and Paul Beatty. The inextricable legacy of Richard Pryor—his boldness, inventiveness, candor, and empathy—lives on.