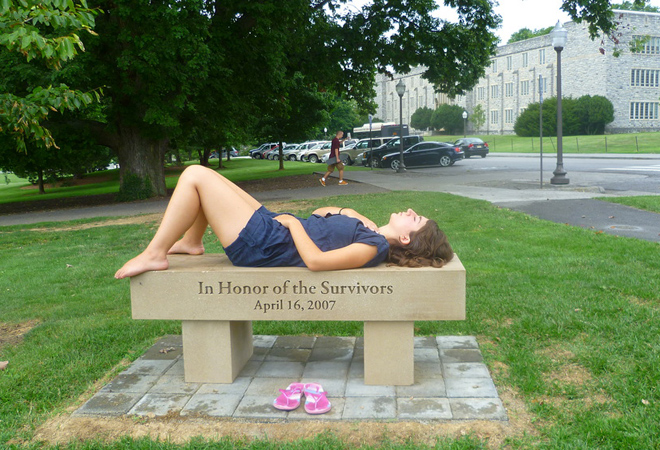 A student participant in the Death in Perspective class

Last year in the New York Times, author George Saunders described his state of mind after a near-death experience when his plane flew into a flock of geese. “For three or four days after that,” he said, “it was the most beautiful world. To have gotten back in it, you know? And I thought, If you could walk around like that all the time, to really have that awareness that it’s actually going to end. That’s the trick.”

The awareness of death, and also the biological process your body goes through in the days leading up to death, are what anchor the popular Death in Perspective class at New Jersey’s Kean University. The waitlist is three years long to go on field trips with Dr. Norma Bowe to cemeteries and morgues. If it sounds macabre, it isn’t. The class is a study on celebrating life, and the motherly professor often becomes involved in her students’ problems, coaching them through difficult times and acting as an impromptu grief counselor wherever she goes.

In The Death Class: A True Story About Life, former Los Angeles Times reporter Erika Hayasaki follows Dr. Bowe and several students in the class. The book explains the biological process of dying, from why the body gets cold to what causes a “death rattle,” before turning to the emotional aspect. How do people deal with death? How can we learn to prepare better?

We sat down with Hayasaki, who is an assistant professor of literary journalism at UC Irvine, to discuss her newly released book and the growing interest in death education.

People who haven’t read the book might think it’s kind of gruesome. How do you explain to them what it’s really about?
It’s very much about the lessons that come out of the book and the class. They come down to how to live your life and how to look at death in a way that you can appreciate life. Death is inevitable. It’s going to happen to everybody so let’s have a different way of looking at it and embracing life. That’s really the takeaway of the book and the class.

You did an initial story on professor Bowe for the Los Angeles Times and decided to go back and spend three years doing research for this book. Why are people, yourself included, so drawn to this subject?
I think it’s a taboo topic for a lot of people. It’s not something we have conversations about every day, although that’s happening more now with death cafes, which are happening all over the country, and death dinners and death salons. There was a big death salon event in L.A. about a month ago.

What is a death salon?
It was put on by a group of younger people who wanted to talk intellectually about death so they had a weekend conference about different aspects. It wasn’t just academic. They had parties, believe it or not, and I went to one at the Bootleg Theater. I wrote an article for the Atlantic about it. It was a death salon party and they had a bunch of speakers get up there who talked about the various aspects of death, but they were doing it in a way that wasn’t a funeral setting. It was a setting where young people were coming and hanging out like it was a bar or a show, really. These things are happening all over the place. The death class is just a part of that. I think there’s been a cultural shift in how we talk about the subject and who’s bringing these topics up; a lot of times it’s younger people and baby boomers.

The book talks about the difference between a good death and a bad death. Can you explain that?
This is a term that Norma talked about but a good death has to do with how you lived your life. It goes back to that idea of Erik Erikson’s model, which has the different stages of life. During the final stages, you’re kind of looking back on your life and wondering if you lived it in a way that makes you able to let go and not fight the inevitable.

Generativity is something that Erikson talks about too: what you leave behind, what you give back to society or family, the things that survive you. That’s a big part of when you finally come to the end of your life: looking back and feeling, did you have love? Did you have good relationships? If you could live it all over would you want to do it again the way you did it? Those things, when you’re looking at the end of your life, they really matter.