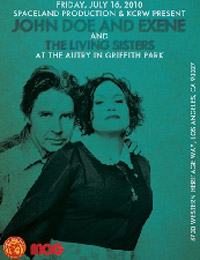 The chaparral-covered mountains of Griffith Park supplied a fitting setting when diehard X fans, museum members, and a host of nouveau folksters donned their cowboy boots for an intimate, KCRW-sponsored show with the Living Sisters and Exene and John Doe at the Autry Museum of Western Heritage Friday night.

Before the crooning began, guests ambled through the exhibition “Home Lands: How Women Made the West”, examining the pottery, the paintings, and, even the guns of the some of the West’s first female settlers; marveled at the intricately woven accoutrements of early domestic life in “The Art of Native American Basketry: A Living Tradition”; and viewed the romanticized, rugged landscapes of Thomas Moran and Alfred Jacob Miller in the ongoing “Romance” exhibit, which explores how artists and performers influenced the mythic West through their interpretations of landscapes, people, and history. A reconstructed Western film set, equipped with the costumes of Gene Autry, Annie Oakley, and other saddle-straddling stars set the stage for what came next.

Los Angeles-based singer-songwriters The Living Sisters started the show with  “Ferris Wheel,” a bluesy ballad about the passions stirred by unrequited love and, after a performance ranging from upbeat doo-wop songs like “Double Knots” to a sweet lullaby called “Cradle”, the trio that synchronizes not only their vocals but also their outfits and choreography ended the set with two covers: David Bowie’s “Starman” and George Clinton’s “Get Satisfied.”

Exene Cervenka and John Doe took the stage looking more like two old country crooners than L.A. punk rock legends. Cervenka channeled Old Hollywood glamour in a glittering gold vintage dress and Doe wore a brown suit jacket and slacks. Played acoustically, “I Must Not Think Bad Thoughts” and “In This House That I Call Home” sounded soft and folksy, although the off-key harmonizing during the choruses remained unchanged. For a moment, as Exene belted out the melancholy lyrics, “The hard part is losing you…my heart’s in California, I’m alone in Arizona” to Doe’s melodic guitar strumming, the two performers seemed to blend into the expansive mural behind them depicting the history—real and mythic—of the West:  wagons and trains, Cowboys and Indians, pioneers. Shouts for the hit song Los Angeles could still be heard as the voices that had shaped local culture for the past thirty-plus years faded away.