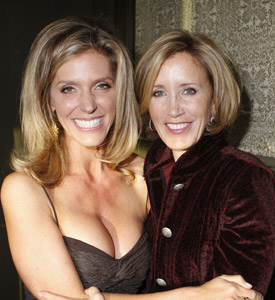 What do you do if you’re at a crowded book launch and you accidentally step on Demi Moore’s toe? This is about the only question that is not covered in Jane Buckingham’s new book The Modern Girl’s Guide to Sticky Situations, a kind of emergency preparedness manual for one’s social life, out this month from Harper Collins (though I wish it had been—I  spent a good part of the night fretting about just that social, er, misstep. Perhaps I’ll find an answer in the next edition?) Here’s what the book does cover: chapters devoted to gaffes in areas like family, weddings, work, and money—everything from how to handle an extremely drunk guest at a dinner party to what to do if your mate wants a threesome (answer: if you’re interested, “it should absolutely be on your terms”).

Moore was one of the handful of celebrity guests in attendance at a recent party at the new-ish SoHo House on Sunset Boulevard to fete the book’s release (Jessica Alba, Felicity Huffman, and Soleil Moon Frye also came out, as did L.A. socialites Kelly Katz, Quinn Ezralow, and Julia Sorkin). They (along with what felt like the entire population of Brentwood), were there to support Buckingham, one of the most fabulously accomplished and well-connected people in L.A. you’ve never heard of.

Okay, I take that back—maybe you have heard of her. She hosts a TV show on the Style Network, The Modern Girl’s Guide to Life, based on her bestselling 2004 book of the same name (she published her follow-up, The Modern Girls Guide to Motherhood in 2006), founded the trend research firm Trendera (she founded and sold her first trend research company, the Intelligence Group, to CAA), and was once named by Elle magazine as one of the 25 Most Powerful Women in Hollywood.

As guests mingled on the wood-paneled top floor of the club, scarfing custom sprinkles mini-cupcakes and taking in wraparound views of the city, Buckingham signed copies of the book with her young daughter by her side (Jane is  married to bestselling motivational Marcus Buckingham). “I just don’t know what to do,” said one Pilates-toned blonde to another as both stood in the long lineup to get their books signed. “My mother-in-law heard me talking about how much I can’t stand her! How can I recover from that one?” Consult page 147, perhaps?