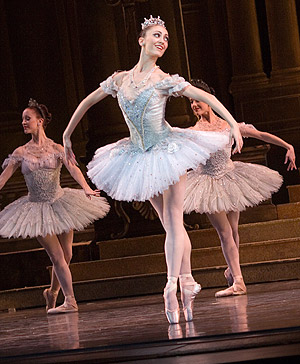 The Chicago-based Joffrey Ballet, once the resident dance company of the Music Center, returned to the Dorothy Chandler Pavilion Thursday night for a dazzling performance of Cinderella. The three-act program, which runs through the weekend, combined gorgeous sets and costumes, comical characters, and a whole lot of heart.

Moments before the lights dimmed, artistic director Ashley C. Wheater took the stage to announce that the evening marked “a renewed relationship between Los Angeles and the Joffrey” and that while the late cofounder Robert Joffrey never saw his dancers perform the classic fairy tale, this production was in fact “a parable that dreams come true.”

I can understand. As a young dancer, I grew up watching the Joffrey here. Promotional posters covered my bedroom walls and I collected backstage autographs from my favorite stars. The company’s refreshing, creative pieces (“Light Rain,” “Le Sacre Du Printemps,” “The Taming of the Shrew”) were so inspiring they got a girl dreaming.

That sense of promise and possibility remains today. Cinderella, choreographed by Sir Frederick Ashton and set to Serge Prokofiev’s beautiful score, not only highlights the Joffrey’s serious talent, but also its youthful energy and spirit. Victoria Jaiani, in the title role on opening night, captivated the audience with her good-natured sincerity (not to mention those leg extensions). Many dramatic extras also had us gasping: candelabras with twinkling lights, glitter raining from the sky, a transformative pumpkin (with smoke!). The stepsisters, played by men in drag as is traditional, nearly stole their scenes. Prince Charming, if a little wooden, served as a solid partner for his sweetheart. The fairy godmother and her charge of fairies representing the four seasons were delightful—always in synchronized step, with arms outstretched like the hands of a clock, reminding us of the stroke of midnight and Cinderella’s fate.

Speaking of time: As with any good fairy tale, you know how the story ends.  With this performance, though, I hoped it wouldn’t.