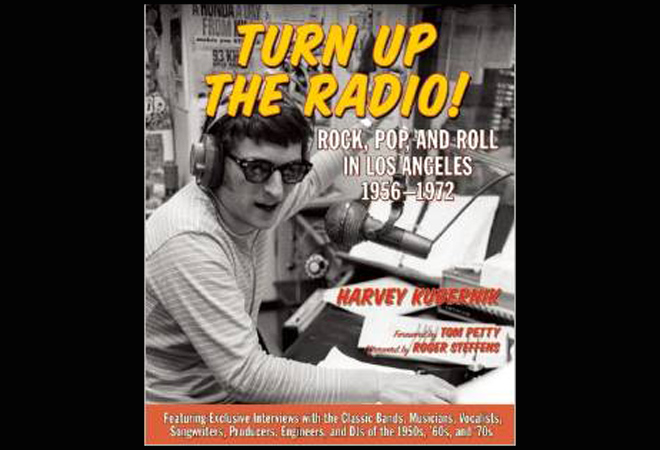 There was a time when there was only one place where you could hear new music: the radio. The medium was central to the rise of rock ‘n roll, which took off in the 1950s, and Los Angeles was a key part of that story. Harvey Kubernik’s new book Turn Up The Radio: Rock, Pop and Roll in Los Angeles 1956-1972, out last week from Santa Monica Press, tells that tale.

The kinetic combination of the radio and what was happening in the city at the time is summed up in the foreword by Tom Petty: He was a kid in Florida, blown away by a song on the radio written by some guy named Dylan and performed by an L.A. band called the Byrds on a Rickenbacker guitar built in L.A., just like the one George Harrison had in A Hard Day’s Night. That was it; he knew he needed to be in L.A.

Kubernik’s book is a love song to music and to the city. It features hundreds of rare and previously unpublished photos—live performance shots of iconic bands in L.A. venues like the Rolling Stones at the Sports Arena, Dylan and the Byrds at Ciro’s, Ike and Tina Turner at the Hollywood Bowl, and The Doors at the Whisky—as well as countless pictures of musicians in recording studios and television tapings. It also includes images of cool memorabilia like posters, buttons, ticket stubs, and newspaper ads. But the real gems are the revealing oral histories by more than 100 movers and shakers, from Lou Adler to Frank Zappa. It pays tribute to the deejays who played the music as well as the musicians, back up singers, songwriters, and producers who recorded it.

The book had to end somewhere or you wouldn’t be able to lift it, and sadly that’s in 1972, but we know the stories go on. Maybe Kubernik is working on part two.