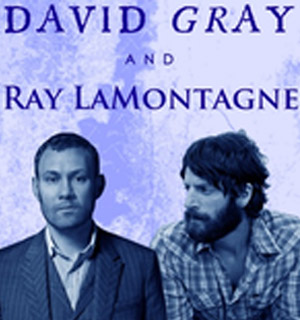 Much has been made of God Willin’ and the Creek Don’t Rise, Ray LaMontagne’s fourth studio album, the first he’s made with his new band, The Pariah Dogs. After a slew of good reviews and some mainstream attention (People magazine gave God Willin’ 3.5 out of 4 stars in a recent issue), the album debuted at #3 on the Billboard Top 200 and #1 on the digital album chart. I half-cringed when I heard the news.

It’s not that I don’t think LaMontagne deserves his success. In fact, just the opposite is true; I own all of his CDs and his 2009 concert at the Hollywood Bowl was one of my favorites of the year. It’s just that fans come with a price, one that LaMontagne is openly hesitant to pay. He told Elvis Costello just last year that he wouldn’t perform his music live if the songs didn’t require it of him. At the bowl last summer, he didn’t so much as open his eyes.

But at the Greek Theatre on Wednesday night, LaMontagne proved he’s adjusting just fine to fame and fortune. He sang new material like “Beg, Borrow, and Steal” and older love songs like “Trouble,” and “Let it Be Me” with his signature rasp, then performed a rendition of “Jolene” that was so beautifully sad it tore my attention away from a couple a few seats over that was having a spectacularly bad first date. And then, out of nowhere, LaMontagne cracked a joke. It was a “Freebird” joke, but a joke nonetheless: “If I had a nickel for every time some asshole yelled out “Freebird” I’d be a wealthier man, and I’m a pretty fucking wealthy man. I can take it, I’ve already got your money.”

Maybe he’s learned a thing or two from David Gray, who he has been touring with this summer. Dressed in a nicely tailored three-piece suit, Gray and his band lit up the stage with a strobe-heavy, 80-minute set of career-spanning hits that got people up and dancing despite it being chillier than any September L.A. night should be. That first date couple down the way? They linked arms during “Flame Turns Blue,” one of Gray’s personal favorites, which he sang and played on the piano before closing the night with a Beatles cover that he dedicated to—who else?—all the lovers.