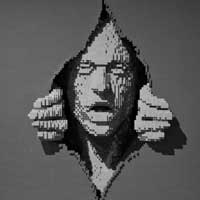 Nathan Sawaya has built his career brick by brick—two million of them, to be exact. The LEGO artist hoards enough of the kids’ plastic building blocks at his L.A. studio to stock his own toy store. The multi-colored bricks find their way into fantastical sculptures, each meticulously crafted and glued in place by Sawaya over the course of weeks or months. Eagles, clouds, skulls, rockets, crayons, human figures, even life-sized replicas of famous figures like Elvis and Stephen Colbert have emerged from under Sawaya’s hands.

In May, the sculptor’s traveling exhibit, The Art of the Brick, became the latest pop culture extravaganza to grace the Forest Lawn Museum in Glendale. It runs through July 21. We met up with this former high flyer to find out why he decided to quit his day job and become a kid again.

Why LEGO bricks?
It’s an accessible type of art. If someone goes to a museum and sees a marble sculpture, they can appreciate the marble sculpture but it’s very doubtful they’ll come home that night and have a slab of marble they can start chipping away at. But people have this toy in their homes. Almost everyone I know at some point in their lives has snapped a few LEGO bricks together. From a technical aspect, I love the distinct lines and the sharp corners. When people are inspecting my work up close, all they see are those rigid angles then they back away and all the right angles blend into curves. From the physicality aspect, that’s almost magical.

What was your relationship with LEGO bricks as a kid?
I had accommodating parents. They let me have a LEGO city. I think the big “a ha” moment was when I was about 10 years old. I wanted a dog and my parents said no. I tore down this LEGO city I had built and built my own life-sized dog out of LEGOs. He was very boxy so I called it a boxer. That was when I realized it doesn’t have to be just what’s on the front of the box.

But then you went to law school.
Like every young budding artist does.

And you got disaffected.
Disaffected is kind. I got out of college and didn’t really have faith in my art as a viable career. I got a job at a law firm in Manhattan doing corporate law. It was a path to what society expected, a professional job. I had to have a creative outlet. I wanted to paint. I wanted to draw.

How did you go from decompressing with LEGOs at the end of the day to thinking, “This is what I want to do with my life”?
I got such a strong reaction. Friends and family kept encouraging me. I put a website together. Soon I was getting commissions. I would put in a full day at the law firm, then come home in the evening and spend six hours at work creating. It was getting to the point where I had more work at night than during the day. It was when my website actually crashed from too many hits that I realized it was time to make a change—leave the tie and the contracts behind and play with bricks full-time.

Did you get much pushback?
I had people questioning my decision. A lot of my colleagues were actually pretty jealous. I think my bosses were confused.

Did law give you patience for painstaking work?
When I was doing big merger and acquisition deals, they would take months to come to fruition. A lot of folks are kind of shocked that I spend 12 hours a day in the studio, building, adjusting, chipping away. It’s a slow, slow process. I glue my sculptures together for transport issues. If I make a mistake and I’ve already glued it, I actually physically have to chisel it apart. There are days when I’ve chiseled away days and days of work.

Have you ever had to scrap something and completely start over?
There was a red dress I did that was recently exhibited in New York [for the photography exhibition titled In Pieces in collaboration with Dean West]. That dress—just to get it to look windblown, I chiseled apart more bricks than were actually used in the dress. It was a beast of a project.

What’s the most technically challenging thing you’ve ever built?
I did a piece for the National Marine Corps Museum in Quantico, Virginia. They want to connect with kids about history, so why not build the Iwo Jima flag-raising out of LEGOs? But this is a very iconic image. You can’t screw this up. I really started breaking down this image: five Marines, one Navy corpsman, and they’ve got all their weight on this flagpole. It proved to be a little challenging. If you were to make the sculpture out of bronze, a bronze flagpole can hold the weight of those Marines. But when you make that flagpole out of Lego bricks… It took a little while to figure out.

Do you ever have the opposite problem, that the LEGO bricks don’t come small enough for you to get the detail you need?
When you try to make a human form look like a particular person, that’s where the real challenge lies. I did Conan O’Brien for Conan’s show summer before last. Very daunting, because it’s important to capture those details. There are those restrictions, sure. But that restriction also gives me some freedom. There’s only so much I can do. I get that question—do you have LEGO create specialty pieces for you, or do you wish they would? And I don’t; I like just using the product. If a kid goes to the exhibition, gets inspired and goes home, they’re going to use the very same bricks that I have. I don’t have any special pieces, I don’t have any special colors. I wouldn’t want to be using something that only I could have.

You’ve done lots of fun pieces: giant crayons, milk and cookies, Mount Rushmore. What do you consider your most emotionally complex or mature piece?
There is a piece called My Boy. It’s actually a [man holding a] small child. It was inspired by a story I was told. Essentially it’s about a parent losing their child. When I first debuted it, a woman saw it and started crying. As an artist, it’s very complimentary. They’re not looking at this piece as just a toy. It’s about the emotion of the art.

Can you tell us about some of the Forest Lawn exhibit pieces?
There is one piece called Pop-Up Book. It’s this castle coming out of this book, and there’s a moat around it. There’s a poem written along the length of the actual pages of the book. That’s a poem I wrote years ago about taking a leap. There’s a piece called Despair, which is a figure holding its head in its arms. There are three pieces actually made from recycled bricks, which is essentially my green initiative. Folks contact me all the time and they have LEGO bricks and their kids have grown up. I’d much rather have the bricks than have them go into a landfill. I don’t sort those bricks [by color]. When you see the sculptures, they’re all speckly. I call it re-play.

There’s a lot of novelty to this medium. As you get to be a bigger name, do you see yourself sticking with LEGOs or migrating into other media?
I keep wanting to challenge myself. The photography exhibit was a lot of fun because I got to play with another field. I’d like to explore other collaborations where I play in other sandboxes. At this point I’m very well known for my work with LEGO bricks, so I’ll keep exploring that but keep pushing the envelope. When I started, the idea was, “All right, can I get LEGO bricks into a contemporary art museum?” Now that it’s there, where do I go? I will keep exploring and maybe explore other media as well.

How do kids respond to your work?
I’ll do a book signing and kids will bring their sculptures from home to show me what they’re working on. It’s great. Two days ago, a woman emailed me. It was “dress like your hero day” at school and her son dressed like me. He made his tie and a top hat out of LEGOs. It’s unbelievable. It’s amazing to me that I’m influencing these kids. Art is a big thing. It’s a great thing. It’s a necessary thing. To be out there inspiring others, it’s fantastic. It’s very special.