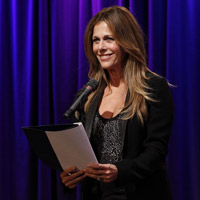 Five singer-songwriters took the stage at Club Nokia to raise money for the Country Music Hall of Fame and Museum on Tuesday. On the very next night, a troupe of Broadway and film actors stopped by The Grammy Museum next door to bust some (other) musicians’ chops.

All For the Hall Los Angeles is an annual event that brings together country stars with an old fashioned a guitar pull. This year Sheryl Crow, Kevin Cronin, and Country itBoy Zac Brown took turns singing and playing songs with host Vince Gill and event regular Emmylou Harris. Vince kicked the night off with “Bartender’s Blues,” a soulful George Jones song that had the whole group singing along. Zac, who just might have gotten the biggest applause of the night, sounded eerily like James Taylor as he sang “Colder Weather,” then did a version of “Free” that incorporated a few bars of Van Morrison’s “Into the Mystic” and damn near knocked Kevin off his stool. Kevin sang REO Speedwagon hits “Keep on Loving You,” and “In My Dreams,” and Sheryl turned in performances of “Everyday is a Winding Road,” and “If It Makes You Happy” that showed off how strong she is as a guitar player, and just how moving and vulnerable her perfectly nasal voice can be.  As for Emmylou, her voice is really fine, even on the few songs of hers that haven’t held up as well as she has. Together, the music and the conversations shared made for a really special night. “Thank you for sharing in our passion and honoring this music,” said Vince as the night wound down. “And for your money, too,” said Emmylou.

None of the stars of that show have written their memoirs, so they were off the hook when Celebrity Autobiography, the show in which actors give dramatic readings of excerpts from actual celebrity autobiographies, moved into the Grammy Museum’s Clive Davis Theatre on Wednesday for a one-night production that focused on works by musicians. “Beyonce, Bieber, and Beyond” included readings by Rita Wilson, Will Forte, Roger Bart, Lainie Kazan, Laraine Newman, Fred Willard and others from books by Kenny Loggins, Just Bieber, Diana Ross, Miley Cyrus, Madonna, Destiny’s Child, Ethel Merman, and more.  The program for the show reminds the audience “we’re not trying to be mean…they wrote ‘em!” but if the cast felt any guilt about making fun of their subjects, they didn’t show it. The show’s really funny. Check their Web site for listings.