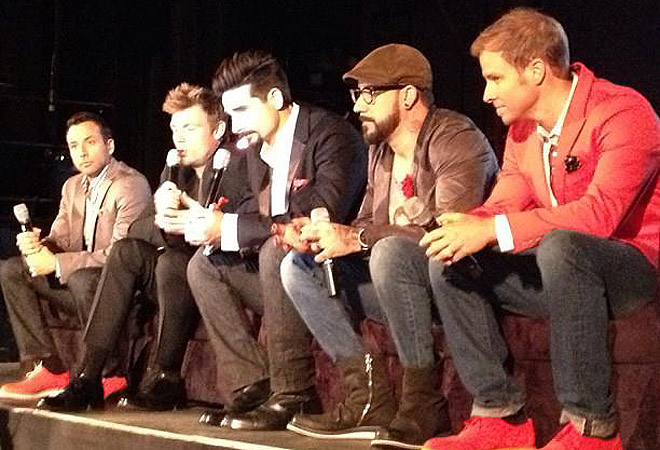 I have a confession: I’m 25 years old and I’m obsessed with the Backstreet Boys.

Their eponymous 1996 album was the first CD I ever owned. I wrote several diaries worth of love letters to Kevin Richardson (and remained loyal to him even after he made the questionable decision to wear a skirt to an awards show). I tacked this poster above the bed in my freshman dorm. I paid an ungodly sum (and we’re talking ungodly) to see their reunion show with New Kids On The Block two years ago. It’s not an overstatement to say that I have spent more than half of my life dreaming of meeting them. The Backstreet Boys and me? It’s a lifelong love affair.

In honor of their 20th anniversary, the most successful boy band of all time (suck it, N’Sync) recently received a star on the Hollywood Walk Of Fame. On Saturday, a fans-only pre-celebration took place at the Fonda, where the guys premiered eight glorious clips from their ninth studio album (set for release this summer) and shared a segment from their forthcoming documentary film.

When I arrived for the press conference I found a line of people wrapped around the building several times—teens who had camped out the night before, mothers with young daughters outfitted in concert tees, but mostly women my age, dressed to the nines and lobster red from sitting for hours under the sun. Like me, they were eager to see their childhood dreamboats in an intimate setting. Unlike me, they didn’t get to coolly utter “I’m with the press” and skip to the front of the line.

I had told myself on the drive over that I would hold it together upon seeing them. I reminded myself that I was a reporter. It was my duty to maintain a modicum of professionalism. Easier said than done. When I walked into the dark lobby of the Fonda, the guys were on stage being filmed by two separate camera crews. It was impossible not to notice Brian in a perfectly tailored coral blazer. Nick was perched on a plush velvet sofa, beatboxing into a mic. There was Howie in red suede wingtips answering one interviewer’s questions while AJ messed around with some of the crew. And then: Kevin appeared. He sauntered out from behind a curtain, his signature goatee trimmed to perfection and his statuesque frame outfitted in a sharp black jacket and gray pants. He looked effortlessly sexy and not a day over 25 (even though he’s 41).

That was the precise moment I lost my mind. In fact, that’s exactly what I texted to my mother: I’M LOSING MY MIND. She told me to pull it together — and I did. As the press conference began, I needled my way to the front and put on my best “I’m a reporter” face. When the emcee asked for questions, my hand shot into the air. “My name is Marielle, and I’m with Los Angeles magazine.” So far, so good. Then, before I could stop myself: “I’m trying really, really hard not to fangirl hardcore right now.” Annnnnnd you blew it.
“Fangirl?” Brian said. “What’s that?”
“You know, like freak out because I’m so excited.”
“Freak out all you want, we love that,” AJ said.
“Ok, well, I’m freaking out. I love you guys.” They all laughed.

WAS THIS CONVERSATION REALLY HAPPENING?

Yes. I managed to banter, however pathetically, with the Backstreet Boys before interviewing them. The Q&A went fine but engaging with them as a fan rather than a reporter? Far more satisfying.