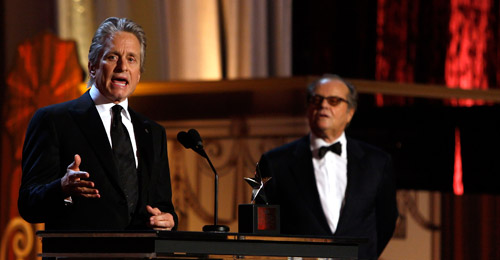 Awards shows can be snooze-fests. If you get lucky, you’ll see a few stars, the speeches will be blessedly short, and you can sneak out before the rubbery chicken arrives. Last Thursday’s American Film Institute Lifetime Achievement Award Gala honoring Michael Douglas was a sensational exception. Held on Stage 15 of the Sony Lot (the same place Dorothy skipped down the Yellow Brick Road), the exceedingly well-produced event opened with a high-octane Chorus Line dance number starring Douglas’ wife, Catherine Zeta-Jones, followed by a moving address by Douglas’ father Kirk, and heartfelt tributes by many of the people who have worked with the honoree in his capacity as an actor and producer. If only Oscar speeches were as articulate as the addresses delivered by luminaries like Warren Beatty, Annette Bening, Matthew McConaughey, Tobey Maguire, Martin Sheen, Oliver Stone, Benicio Del Toro, Kathleen Turner, Sharon Stone and Jack Nicholson (donning shades, naturally). By the time Steve Swankay—an ex-child soldier from Sierra Leone whose education Douglas sponsored—made a surprise appearance, there wasn’t a dry eye in the house. In a taped segment, Wonder Boys director Curtis Hanson recounted the experience of working with Bob Dylan to score the film, when suddenly the lights dimmed and out walked the legend himself to perform “Things Have Changed.” They certainly have.