Home Uncategorized A Fine Idea: Inviting the Entire Theater to the After-Party for Buyer... 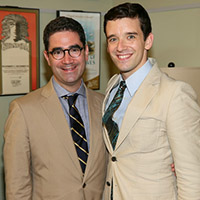 You can’t even say the premise of Jonathan Tolins’s Buyer & Cellar without smiling: A struggling actor takes a job in Barbra Streisand’s basement, which is set up like an old-timey mall, and hilarity ensues. Talk about a classic.

Michael Urie (Ugly Betty) plays Alex in this one-man show at the Taper, and it really is a riot. The whole play is based on a single line in an interior design book that Streisand wrote; in one section, she mentions that her basement is meant to look like a street in a small New England town, and each room is its own “store” (an idea she came up with after spending two days at the Winterthur Museum in Delaware). Playwright Jonathan Tolins imagined what a job in that basement might be like, working the mall angle in hilarious detail. For this production, Stephen Brackett directs.

The opening night audience laughed, guffawed, chuckled, giggled and literally held their sides in pain watching this work of fiction based on fact unfold. Afterwards I heard a few complaints from die-hard Streisand fans, but the majority of the crowd loved it. I kept scanning the last row in the dark theater hoping that Streisand would slip in to see the show. (Alas, no luck.)

And file this under “Great Idea”: The Taper included an invite in the program for the whole theater to join the cast (okay, it’s one guy – Urie) at Kendall’s Brasserie (in the Music Center) after the show—a first time thing. While it was crowded, everyone was in such a grand mood (having been completely charmed by Urie’s performance) that it just didn’t matter. Who popped by for opening night? Bruce Vilanch, Morena Baccarin, Christine Ebersole, Kate Flannery, Tracie Thoms,  Fred Willard, and Nick Jonas among others in the packed house. Need to smile? Go see Buyer & Cellar.