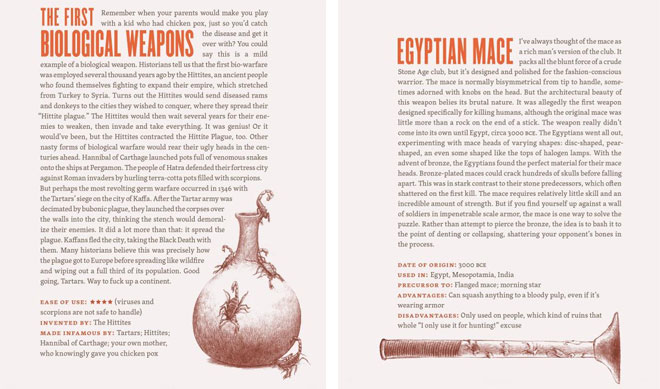 You can thank The Hunger Games for making crossbows cooler than they’ve been since the 14th Century, but what about the plumbata, the sumpitan or the humble multi-pronged kpinga? A History of Weapons: Crossbows, Caltrops, Catapults & Lots of Other Things that Can Seriously Mess You Up is here to help. Recently released, John O’Bryan’s humorous field guide to ferocious and ferociously cool-looking armaments features 135 entries with a handy “Ease of Use” ranking and vital facts. There are also sections with obscure information about gladiators, Rajputs, mythology’s top 10 weapons, and scalping vs. headshrinking. You can learn about Greek fire, the “ancient world’s napalm” that inspired the “wildfire” in Game of Thrones. Illustrated by Barry Orkin to look like a vintage storybook, the volume covers everything from the atlatl to the zhanmadao. It will teach you to distinguish an arquebus from a blunderbuss, a kwan dao from a falx, an onager from a trebuchet. Finally.

We interviewed the author who discusses his fascination with these beautiful yet harmful devices and advises what ancient weapon not to brandish on L.A.’s mean streets.

How did you get interested in weaponry? Are you a collector? Do you indeed have “thirty-seven crossbows”?
Let’s start with a small disclaimer: It should be apparent to anyone reading this book that parts of it are true and parts of it are complete bullshit. I’m not going to say which parts are which because that would eliminate some of the fun.

I grew up in the South so I grew up learning all about Andrew Jackson’s duels. Apparently he would challenge you to a duel just for criticizing his shoes.

What prize pieces do you have in your arsenal?
I have a cat with very sharp claws, which I launch with a catlatl (patent pending).

In your bio you write: “His mother would read him the Dungeons & Dragons Monster Manual when he couldn’t sleep.” Did role-playing games inspire your interest in weapons?
D&D was a big influence, as were those Wizards, Warriors & You choose-your-own-adventure books. You started out as a knight or wizard and got to pick either two weapons or spells. It really forced a child to carefully evaluate his or her inventory. Also Baldur’s Gate I and II. All of Tolkien. Can’t stress that enough.

You mention the Glaive from the 1983 movie Krull in your introduction. What are your other favorite movie weapons? Your favorite fight scenes?
With weapons, it started with lightsabers. From there, it went to Indiana Jones’ bullwhip and Data’s spring-loaded boxing-glove-in-the-belt (in The Goonies). Oddly enough, the most formative fight scenes for me were the ones without weapons: see The Karate Kid. My interest in weaponry was fueled largely by growing up in the 80’s and being inundated with ninja movies and Cold War propaganda. To this day, those are two of my favorite artistic mediums.

What weapon is the most overrated? What weapon do you think people should know more about?
Nunchuku are pretty overrated, at least as far as effectiveness. As is the spiked flail that has become an icon of medieval warfare. The earliest firearms were probably not the game-changers most people would think. Some of my favorite stuff is the armaments of ancient India. People don’t know much about the urumi and the chakram, but they should.

What were you most unhappy to leave out of your book?
I wrote a pretty great piece on the correct way to commit seppuku. The editors felt it was too dark. There was also a chapter on World War I that was cut because of length but also because the early 1900’s are when weaponry begins to foreshadow the terrors of the modern world.

What are your favorite books on weapons?
Weapon: A Visual History of Arms and Armor and Medieval Weapons and Warfare are two standards in any antique weapon geek’s collection. I referred often to those books for visual stimulation. I never felt like my book was competing with these directly. It’s not trying to be a history textbook. People buying it for that purpose are going to be disappointed!

Your book makes clear that from Archimedes (whose brain you call “the baddest weapon of antiquity”) to Richard Gatling there’s no getting around the fact that enormous ingenuity and artistry has gone into fashioning weapons.
Much of my interest in weapons revolves around antiquated arsenals. Perhaps this is because it’s been 500 years since anyone was murdered with a morning star and you can divorce yourself from the brutality somewhat. Personally I find modern weaponry a little less interesting. Where’s the challenge? Is anyone really amped to see gunsmiths shave another microsecond off of how quickly you can decimate a human body? Actually, I withdraw that question.

What has spending all this time with the history of weapons taught you about the ways we fight and wage wars today?
Wars have always been fought so the “haves” can keep having, right? Nowadays, they’re usually fought so arms-makers can move units. And human life has never been worth anything. So hug your children hard tonight.

Any weapons you would recommend for situations that might arise in present-day Los Angeles? A long line at your local café, a traffic jam on the 405?
I was going to say “katana” but then I remembered there was a guy who was killed by police officers for drawing one in public a couple of years ago. So be warned: They will shoot you for carrying a katana.

7 Bars in L.A. That Are Perfect for Reading Books