Home Uncategorized A Diva Do 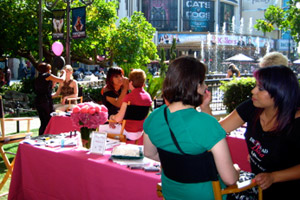 With the cheerful chatter of women in the air, a make-up artist blends shadow into my lower brow to “emphasize the shape of the eyes.” A masseuse kneads the tension from my back. The sounds of Liz Phair and Sheryl Crow blast from a nearby speaker. No, this isn’t a diary entry of a starlet or a mid-week daydream. It’s the “Pamper Your Inner Diva” event at the Grove.

That’s right, in honor of Drop Dead Diva’s season two debut, the Lifetime network invited shoppers to get pampered for a recent afternoon. Tables laced in pink ribbon dotted the mall’s main lawn, where a woman greeted the crowd: “Hello divas!” Behind her, a promotional backdrop showed off the show’s main character, a model-to-be reincarnated in the body of an intelligent but bashful plus-size attorney named Jane Bingum (a magenta-clad Brooke Elliot).

The event, which included a sneak peek of the show’s season two premiere, gave everyday women (and a few tag-along spouses) a taste of the star treatment, from manicures, massages, and makeovers to free DVDs of Drop Dead Diva’s complete first season and Pinkberry. Ladies got a glimpse of upcoming trends– psst, floral prints and army-inspired colors and cuts are in, according to Nordstrom’s personal stylist manager – while sampling scented body creams. A mom laughed with her young daughters over makeovers. Nearby, a silver-haired lady took a breather at the manicurist’s table while watching her granddaughter jump on the grass. A group of middle-aged Writer’s Guild members and a twenty-something student waited for massages and rolled their eyes over an onstage model presenting “new” ways to wear a scarf.

But in a city notorious for prima donnas, the complimentary beauty services didn’t lure too many patrons away from the Grove’s polished maze of boutiques and restaurants.  Only a handful of people stepped onto the park’s manicured grass to partake in the pink-accented R&R. As the afternoon waned, those that did dispersed into the shopping crowd and continued on with their lives, just perhaps a bit more diva-like than before.