Home TV A Crowdsourced Variety Show for Millenials? Joseph Gordon-Levitt Has it Covered 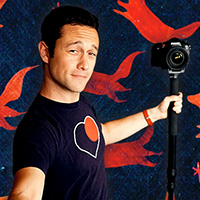 HitRecord on TV!, Joseph Gordon-Levitt’s new experimental series, premieres Saturdayon Pivot, a television network targeted at millennials. In case you’ve tuned out the early buzz, HitRecord on TV! is a half-hour variety show—with a twist. As with Gordon-Levitt’s HitRecord website, where creative projects are crowdsourced, each episode of the show showcases the work of multiple, potentially thousands, of contributors from around the globe.

HitRecord has already released books and CDs, but this foray into television is its most ambitious venture yet. Herewith, five things to know before you tune in:

You’ll Never Have Enough Time To Watch The Full Credits
“This is not a joke. This is not a marketing gimmick. This is an invitation.” So says Regular Joe (Gordon-Levitt himself) in a video introducing the series on HitRecord’s site. An invitation to who? To you. To do what? Be a part of the show.

Early in the first episode Gordon-Levitt explains HitRecord’s bottom-up approach to television production. Anyone can contribute media to be considered for inclusion in an episode, from illustrations, to acting and editing services—even a recording of a few riffs on the guitar. In keeping with the enterprise’s communal spirit, featured contributors will receive a share of the series’ profits after HitRecord takes its 50% cut.

Each Episode Has a Theme, Thank God
The first episode’s theme is, fittingly, “The Number One.” A concept that holds together the sometimes manic nature of the show’s myriad elements. Snow, outsiders, the road, and childhood are all themes of upcoming episodes.

But Not a Recurring Format You Can Count On.
Each episode is comprised of a number of clips. Some of are films, some are music videos or live acts, and some, according to Regular Joe, are simply conversations. On the upside: HitRecord on TV! should have something for everybody.

It’s Not For Those Who Like Their Entertainment Zen
Much of the animation in “The Number One” is bright and colorful. The editing is sometimes frantic and it’s nearly always high-paced. The result is a flashing mish-mash of creative television we wouldn’t recommend to anyone who’s prone to headaches or seizures.

Joseph Gorden Levitt Can Sing.
Ok, so we knew this already from his 2011 guest appearance at the Hollywood Bowl, but seriously, the guy’s got pipes to go with all that vision. Watch the episode to see what we mean.