Home Uncategorized A Court of Their Own 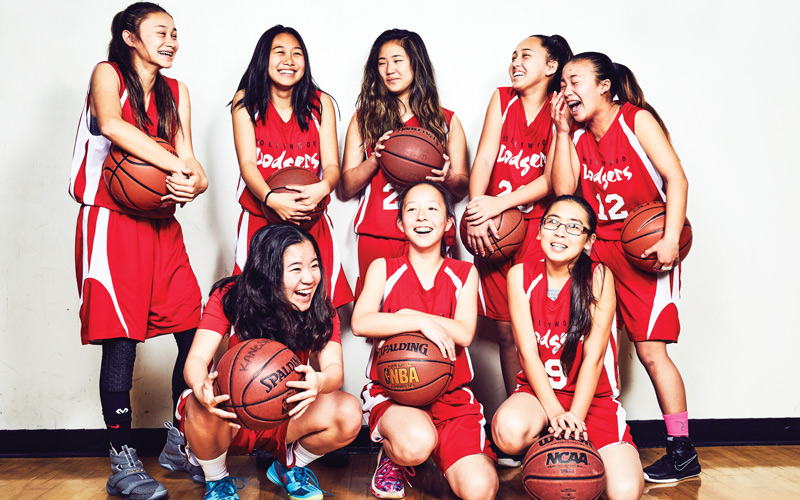 Throughout Southern California there are hundreds of teams and more than 10,000 players competing in Japanese American basketball leagues, from the Tigerettes Pulelehua to the Wanjettes Purple Mambas. If you’re Japanese American in the L.A. area, you either played in a league or had parents or siblings or friends who did. “People say, ‘My mom played,’  or ‘my dad played,’ ” says Leland Lau, commissioner of the Japanese American Optimist Invitational Basketball league, which oversees more than 120 squads across the region. “If you didn’t at least try, you’d probably get banned from the dinner table.”

It’s Sunday morning, and the Wanjettes Rainbow Warriors are taking on the Jetts Supersonics in Montebello. The players are quick down the court, making speedy cuts to the basket before dishing out to the open man. The passing is so precise, the style of play so unselfish, it’s easy to forget that these are seven-year-old girls. On a larger court past the school’s aquatic center, two eighth-grade girls’ teams are exhibiting the same type of play: running back on defense, crisp passes around the perimeter. Unlike in many youth leagues, which form teams when the players are in third or fourth grade, JAO players join teams at age six and stick with them through high school. “My daughter’s team played together all the way through their senior year,” says Mike Terukina, registrar for the South Bay FOR, a member organization within the JAO.

JAO members nod with pride at alums like Jamie Hagiya, a starting point guard for USC before going pro in Greece and Spain, and Natalie Nakase, three-time captain at UCLA who became the first assistant coach in the NBA—albeit for a brief summer stint—with the L.A. Clippers. “The boys have no chance because of their size,” says Terukina. This month the JAO girls’ league is hosting its annual tournament, and many member organizations, like the Tigers, are fielding more teams than they have in years. “We had to limit it to two teams per age group because we had so many people wanting to join,” says Kaz Kayuda, the girls’ athletic director. And then there’s the Budokan; in the offing for more than two decades, the Little Tokyo athletic facility finally breaks ground this summer.

Basketball has become a last remaining tie to a shrinking community without true geographical centers (Little Tokyo and Sawtelle, for example, have plenty of Japanese businesses but relatively few Japanese American residents) and with the highest outmarriage rate among Asian Americans. Almost all of the squads are losing kids to club teams, off-season traveling squads created to give players an edge in high school. While some JA leagues have largely abandoned their ethnicity requirement to make up for these losses, the JAO still requires that more than half the team must be Japanese American, although those kids can be as little as one-eighth Japanese.

Skill and strength aside, basketball favors the tall. So just how did Japanese American kids—who are, as a general rule, not oaks—overwhelmingly come to choose the sport over past favorites like baseball, bowling, or golf? Today’s leagues trace their roots to social clubs and sports teams formed by Japanese Americans in the 1930s. Prohibited from joining already-established groups or athletic organizations—not to mention voting, owning land, or marrying whites—Japanese Americans created their own. The organizations continued to thrive during World War II, behind the barbed-wire fences of the country’s ten internment camps. Photographers like Ansel Adams, Dorothea Lange, and Francis Stewart, barred from taking photos of rifles and guard towers, captured images of internees going to church, raising chickens, and yes, playing basketball.

There are photos of girls playing the sport at Manzanar, but many organizations wouldn’t field female teams until years later. “When I was playing, there were hardly any girls and we didn’t play that much,” says Sallie Fujii, a P.E. instructor at Bell High who played on the Jetts in grade school and middle school and continues to play in a JAO women’s league; both her daughters are Tigers. “Now there are so many, and they play year-round.” Which leads to certain advantages in high school. “I would say 90 percent of the girls coming out of JAO can make their freshman team,” adds Fujii. It’s a different story in college, where height is more crucial, but until then, they can roll with the best of them.