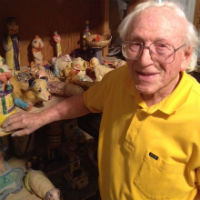 The Good Luck Gallery on Chung King Road in Chinatown is the first gallery in Los Angeles to focus exclusively on outsider art and the work of self-taught artists. Opened in March by Artillery magazine publisher and artist Paige Wery, Good Luck debuted with a show dedicated to the clay sculptures of 103-year-old sculptor and first time solo exhibitor Harry Steinberg. “I just fell in love with his obvious absolute love of art,” says Wery about Steinberg’s work. “He doesn’t take the art world too seriously.”

Steinberg’s solo exhibition at The Good Luck Gallery closes on April 12, and this Sunday Wery will host a special meet-the-artist event where patrons will have a chance to chat with the centenarian sculptor.

Wery met Steinberg last fall while attending a ceramics class in a backyard that turned out to belong to the artist. She was immediately struck by his charm and gregariousness. “I thought ‘Who is this man?’ I had no idea he was 103,” says Wery, who was invited into the house to see some of Steinberg’s works. “I love the whimsy in his art. He just sits down and starts playing with the clay.”

Steinberg was a surgeon for most of his life and served on the battlefield during World War II. After he retired, his wife, who has been a ceramicist most of her life, convinced him to pick up clay, which manifested in a series of traditional nudes that now decorate the Steinberg’s front yard.

“My focus with Good Luck Gallery is on self-taught artists. That means no one I’m showing in the main gallery will have an MFA or a degree in what they’re doing,” says Wery, who was fed up with seeing the same ideas regurgitated in gallery after gallery. “I love the fact that people are creating art for a reason other than wanting to become a famous artist.”

Becoming a famous artist is the furthest thing from Steinberg’s mind, according to Wery: “I don’t think he realized the extent of it until he walked into the gallery on opening night. A lot of the pieces we have were covered in dust and grime when we found them, so we had to clean them up. He had never seen them like that before.”

The works on display at the Good Luck Gallery were all produced within the last 10 years. Steinberg is prolific and works on his sculptures every day. He loves talking about them too, according to Wery, and will instruct buyers on how to maintain their pieces. “I rented a couch for the opening for Harry and his wife, who is 87, to sit on,” Wery says. “But Harry was so busy showing people around that he never sat down once.”

The Good Luck Gallery’s next show features works by Jeff Cairns and Andrew Riiska. The exhibition opens on April 26.