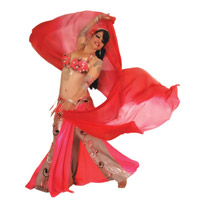 In the 1960s and ’70s, Los Angeles had a thriving Middle Eastern-themed club scene. Venues like the Fez, Haji Baba’s, and the Seventh Veil (now a strip club) boasted live bands, elaborate decor, and a coterie of belly dancers. Like disco, the fad faded. The image of the veiled temptress, eyes rimmed with kohl, has been harder to shake (no pun intended). “A lot of people have the wrong impression about belly dancing,” says Princess Farhana, aka writer and musician Pleasant Gehman (pictured). A specialist in the classical Egyptian dance form raqs sharqi, she teaches at Dance Garden in Atwater Village and is a headliner at the annual confab Cairo Caravan. Held June 1 through June 3 on the Queen Mary, it is one of the oldest and largest belly dance conventions in the country, with dozens of panels, performances, and this year for the first time a discussion titled “The Golden Age of the Nightclub Dancer.”

“Many think belly dancing is for the male gaze and titillation,” Gehman says. “It’s a form of dance that most women throughout the Middle East do for each other and not usually in sexually integrated situations.” Not that we’re discouraging gents—who are also performing at the festival—from enjoying the show.

ALSO: Chris Nichols recalls his most unusual experiences aboard the Queen Mary