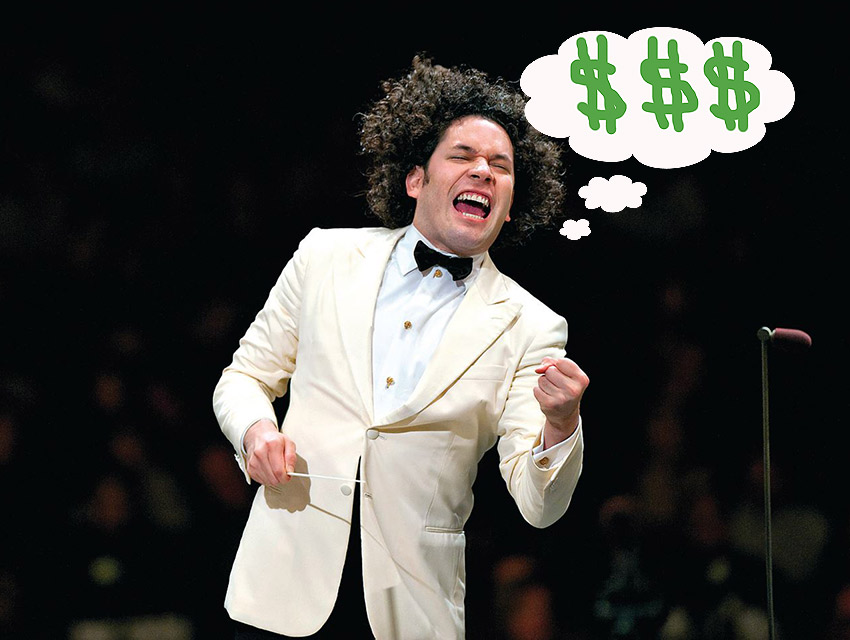 It was announced yesterday that entrepreneur, philanthropist, and former Phil chairman David Bohnett has gifted $20 million to the LA Philharmonic. It’s a wildly huge sum by anyone’s account, although not the largest the Phil has ever received—that honor goes to the Walt and Lillian Disney foundation, who gave the orchestra $25 million over ten years ago.

The money is to be split down the middle, with $10 million going towards a fund for “discovery and innovation” and the other $10 million serving to permanently endow Deborah Borda as the Phil’s president and CEO.

Spending a bit of cash on discovery and innovation is all fine and good, but we’ve got nine ways the Phil can make everyone’s life a little better with some help from Bohnett’s overstuffed bank account. Full disclosure: we here at LA mag have never seen the likes of $20 million, so we really have no idea what many of the below items would cost in the real world. But we can dream.

Take at least three dollars off of everyone’s parking.
We’re already paying an arm and a leg for tickets. Cut us some slack.

Commission an Iron Throne made of Valyrian steel conductor’s batons.
All hail His Grace, Gustavo of the house Dudamel, the First of His Name, King of the Concert Hall and the Bowl of Hollywood, Lord of Los Angeles, and Protector of the Realm.

Bring in a hologram generator.
Even kings need a vacation. Give Dudamel a break and Let Mozart or Bach or Beethoven conduct his own masterworks for a change.

Offer free light sabers on composer John Williams’ movie night.
Because duh. But they have to be the old school kind—not the JJ Abrams variation.

Swag bags. Every seat, every show.
Everyone’s doing it.

Put in outdoor heaters at the Hollywood Bowl.
Sometimes we forget how cold it gets at night and leave our one sweater at home. And while we’re at it…

Heated lumbar supports.
Those benches are not comfortable.

Premiere all-expenses-paid live karaoke.
Pour Some Sugar On Me backed by the LA Phil might be the weirdest and best thing that could ever happen.

Install a Hyperloop from Pershing Square to Disney Hall.
Elon Musk’s high-speed transportation system from L.A. to San Francisco would reportedly cost $6 billion. How much could a baby one from DTLA to Disney Hall possibly be…?