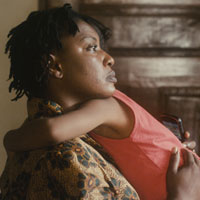 The 22nd annual Pan African Film Festival was held last weekend, showcasing dozens of feature-length films, documentaries, and shorts. Here are some of the most memorable ones. Some of the films are in release now while others will hit theaters throughout the rest of the year.

American Promise
When their son Idris started school, documentarians Joe Brewster and Michele Stephenson embarked on an ambitious project. They decided to follow him and his best friend, Seun, from kindergarten through high school graduation, filming all 12 years of their education. The result is an epic look at education, race, childhood, and everything in between as it is experienced by young black men in America today. No matter who you are, you’re likely to recognize some of your own experience in Idris and Seun’s journey. For two and a half hours, the viewer is a part of these two families’ lives, both their heartbreaks and their triumphs. This was one of the best, most overlooked documentaries 2013.
Currently available to view on the PBS POV website.

Anita: Speaking Truth to Power
Anita Hill caused tremendous controversy when she accused Supreme Court nominee Clarence Thomas of sexual harassment. More than 20 years later, she has broken her silence, discussing the senate hearings and public scrutiny. This documentary examines her case, using it as a lens to explore the larger issue of sexual harassment in the workplace. The film also seeks to humanize Hill, showing her in the company of family and friends, rather than just on a witness stand.
Anita will be released in theaters on March 21.

B for Boy
This Nigerian drama follows a woman who is trying to have a son. Despite her other successes, her inability to fulfill this obligation makes her the object of scorn. The increasingly complex web of deceit she spins in order to keep up appearances highlights the pressures placed on women to bear male children. The film is still touring various festivals and receiving accolades at each one. Keep an eye out for a release date.

Blackbird
Randy, a deeply religious and deeply closeted teen living in a small Southern town, does everything he can to stay upbeat. When his parents (played by Mo’Nique and Isaiah Washington, who also produced the film) split up after the disappearance of his younger sister, Randy feels that his burgeoning sexuality is one more burden to bear. Based on the novel by Larry Duplechan, Blackbird tackles subjects that few films, mainstream or otherwise, have dared to address. It’s a hodgepodge of influences and styles, centered around a sometimes corny but sometimes daringly soulful performance by newcomer Randy Rousseau. Look for a release announcement.

Blue Caprice
In this dramatization of the beltway sniper attacks of 2002, Isaiah Washington plays John Allen Muhammad and Tequan Richmond plays his “pupil,” Lee Boyd Malvo. A road trip movie in the most twisted sense, Blue Caprice subverts the conventional paternal bond, showing it as an enticement to violence. Since its debut at last year’s Sundance, the movie has been challenging audiences everywhere.
Blue Caprice is available on VOD and DVD.

Freedom Summer
In the summer of 1964, activists from around the United States swarmed into Mississippi to register African American voters. They faced fierce resistance from institutional advocates of segregation but the summer was a vital turning point in the civil rights movement. This documentary, produced for PBS’s American Experience series, uses interviews with surviving participants to paint a portrait of the times. It’s a work of history that will surely see use in classrooms for years to come. As of now, it has no airdate on PBS.

Go for Sisters
Veteran indie filmmaker John Sayles with a story about two women who were extraordinarily close in their youth but have since grown apart. In fact, one is now the other’s parole officer. Sayles’s films have often displayed his social conscience and this movie continues the tradition. The film received a limited theatrical run last November and should hit home media sometime this year.

God Loves Uganda
This documentary surveys the precarious situation of Uganda’s LGBT community and the religious contingent that condemns them. Soon to be signed into law, a recent bill criminalizes homosexuality (an earlier draft made it a crime punishable by death). The film is a messy but important piece of work.
God Loves Uganda is currently playing in select cities.

The New Black
Using Maryland’s Question 6, a referendum on same-sex marriage, in the 2012 election as its focal point, this documentary looks at the relationship between African Americans and homosexuality. Along the way, it deconstructs the notion that black Americans form a monolithic voting bloc, laying out the myriad nuances in how different people approach this issue. It’s ultimately a hopeful film, capturing the defeat of Question 6.
The New Black is currently touring the country at various festivals and special screenings.