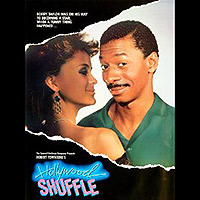 This week marks the 25th anniversary of Spike Lee’s Do The Right Thing, where a certain stretch of Brooklyn is as much of a character as Lee’s starring role as Mookie, Rosie Perez’s Tina, and Danny Aiello’s Sal. (So much so that the borough recently held a “Do the Right Thing Day” block party.) Without question, Lee’s comedic drama is one of the most impactful films of that decade—and Lee got the Oscar nomination to prove it.

Less is known about another pivotal 1980s dramatic comedy about a young black man’s clash with a prevailing culture, this one about an twenty-something African American actor trying to make it in the entertainment industry. Robert Townsend’s breakout 1987 film Hollywood Shuffle is one of the most brilliantly caustic satires of the era—and one of the most influential, even if Townsend, who funded the independent film with his own money (spread out among a few credit cards) hasn’t quite reached the level of having a holiday named in honor of his film.

This month’s Los Angeles magazine, which celebrates the ‘80s as a decade that changed L.A., features an interview with Townsend and one of his fans, director Tim Story (Barbershop, Ride Along) who decided to attend film school after watching Hollywood Shuffle as a teenager. As Story puts it in our interview (on newsstands now), “I loved Spike, but Hollywood Shuffle was my own backyard—this movie spoke directly to me.”

Readers can see the film’s impact for themselves at tonight’s 7:30 p.m. screening of Hollywood Shuffle at the Arclight Hollywood which will feature a Q&A with Townsend (led by yours truly) immediately after. In support of the July issue, KPCC just aired a conversation with Townsend, which you can enjoy here.