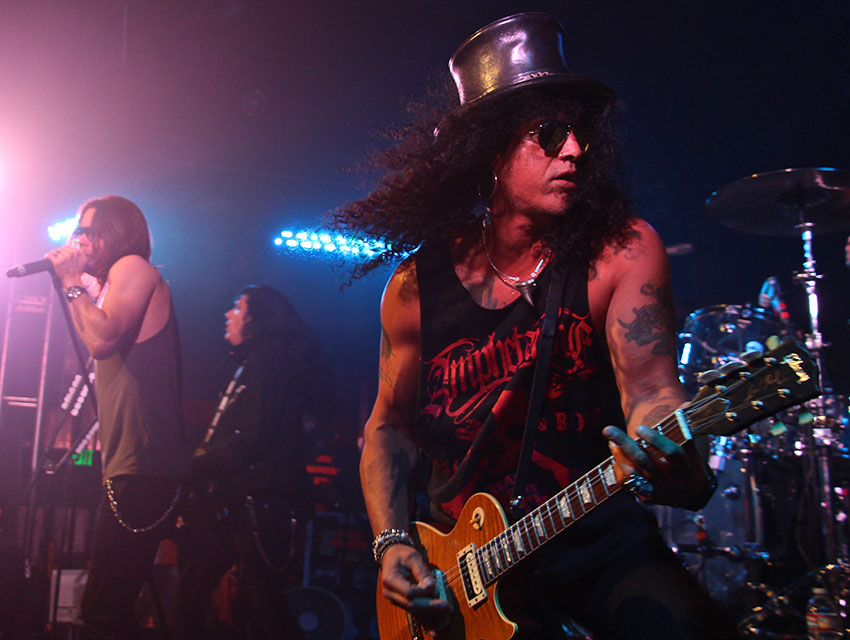 Sunset Boulevard’s Guitar Center is having a killer 50th birthday week—and it doesn’t look a day over 25. The music store brought Slash from his usual arena setting and set him up in three of L.A.’s most iconic clubs—the Troubadour, the Roxy, and the Whisky A Go Go—for a week of intimate gigs.

On Tuesday night Slash rocked the Troubadour with Myles Kennedy and the Conspirators. He played material from his most recent album World on Fire and classic songs from his career with Guns N’ Roses, Velvet Revolver, and other bands. The Rock N’ Roll Hall of Famer humbly played at the side of the stage, moving forward for his blistering solos but largely left the limelight for Kennedy, who has collaborated with Slash on his three solo records.

Slash was equally modest the following day, when we caught up with him to ask about what it’s like to go from a lifetime of stadiums back to those West Hollywood clubs, how his upbringing on the Sunset Strip shaped him, and how he feels about playing “Sweet Child O’ Mine” for the 11 millionth time.

If you can’t catch Slash this week, set your DVR: DirecTV’s Audience Network (channel 239) will broadcast a 90-minute concert film of tonight’s Roxy show on November 9 at 8 p.m.

The Troubadour must be an adjustment from the venues you’re used to playing.
It was nice to play the Troubadour, but we’ve been playing in arenas for so long I was like, “Wow, this is tiny!” I love playing small gigs like that when you get a chance to do it. We played at Santos Party House in New York last weekend and that was a tiny place too. By the time we’re done, we’ll be fully back into the club mode before we play the big places again.

What are some of your best memories of the Sunset Strip?
I was raised on the Sunset Strip because when I first moved to America, I basically moved to Los Angeles from England. We lived in Laurel Canyon, and that was in 1971. That was during this whole period of Asylum Records, and Joni Mitchell, Jackson Browne, and Linda Ronstadt. My mom made clothes for all of them and my dad designed album covers for Asylum, which was David Geffen’s old company. So I was raised going to the Troubadour pretty frequently.

My mom did the clothes for Rocky Horror [Picture Show] when it was a stage production and when it came to America they did a stint at the Roxy, so every week I was at the Roxy. Then I worked at the Whisky. I was a freelance roadie, got paid—well, it was illegal—in beer. At that age, I was a little older. I would see bands play there all the time. And then also the Starwood, which no longer exists. So I’ve got history with that area.

Was there a performance from those early days that blew your mind?
Cheech and Chong opening for the Rocky Horror Show I used to love. It was awesome. As far as rock and roll is concerned, as I got older and started going to shows on my own volitions—as opposed to being a hanger-on with my mom and dad—I would see Nikki’s [Sixx] old band London at the Starwood. Exciter, Quiet Riot, The Detectives. I saw some of the punk bands in ’78, the Germs and stuff like that. At the Whisky I saw Motley Crue, Yesterday and Today. I’ve seen a lot of different bands at these different places.

So you’ve watched the Strip evolve over the years.
It was interesting [on] the Sunset Strip; there was such a strong scene going from the late ’60s, which I didn’t get to experience. I came in ’71 and it was very, very strong, really vibrant, fun and exciting, inspired and really creative. As trends morphed it remained a really electric scene, all the way to the ’80s when Guns N’ Roses were around and we had our heyday on the Strip. I remember in 1989 we came back off the first Guns N’ Roses tour, and it was just dead. The whole thing basically shut down and it hasn’t really come back. There’s always bands playing and you have some big name artists through as well, but the whole scene as it was in the ’70s and ’80s has dissipated completely.

They’re trying to rekindle some of that with the Sunset Strip Music Festival.
The Sunset Strip Music Festival is great. I love that. I was part of it a few years ago. I was there when Ozzy did his set and it’s great. It’s not the Strip [itself]; it’s just the whole music business. There is no scene anywhere. I think the only thing I’ve seen recently that has any kind of similarities of a scene at all is what’s happening with EDM. You go to some of these gigs and see a really enthusiastic, big communal gathering at these concerts. But that’s just one particularly new, faddy type of music that’s going on right now. In general, worldwide, there’s no area that has a really big scene.
You’re still cutting records to tape, so you’re really still focused on the process of making music.
I’ve been doing what it is that I set out to do from the time I picked up a guitar, and I’ve been expanding on that ever since I was 14. I’ve really been sticking to my general direction, even as things around me come and go. I’ve gone from being in a really huge popular band to being completely obsolete in some ways. But I just stick to what I do whether it’s popular or not [laughs].

What drives you to do that?
I think when it comes down to it, it’s the fact that I just love it so much. I love making music, I love playing, I love recording, I love touring especially. I love playing live. I keep doing it because I dig it. I’m fortunate that I haven’t become jaded and complain about it like some of my peers who have been doing it for a long time. I understand they get to a point where it’s a grind, but I still love it as much if not more than when I first started.

So when you play “Sweet Child O’ Mine” for the 11 millionth time, you still feel a connection to it?
Yeah, I’ve never wanted to just go through the motions. Every night it’s about that night. I really am 100 percent invested into that gig, so I don’t mind playing the songs. I still find different things to do throughout the songs. It keeps it more interesting so I don’t fall into a routine. You’re going to do it, so you might as well look at it from the bright side.

How has it felt playing the new material live?
It was nice [on Tuesday] night doing a new song that we’ve never played live before. We’re going to do another one [on Thursday] night and probably another one Friday. So that’s exciting and that helps break things up. It’s not so monotonous if you get to keep doing new material. If the audience is aware of it, and has actually heard the record, that is even more of a bonus.

When the tubes on the amps have cooled, and the night is over and you get to not be Slash, what does Saul Hudson like to do to relax?
You know what? I don’t. I’m not much of a relaxing guy. I’m constantly working or thinking about working. It never really stops [laughs].