Home Uncategorized 7,000 Miles From Home, a Dress and a Rug Serve as Powerful... 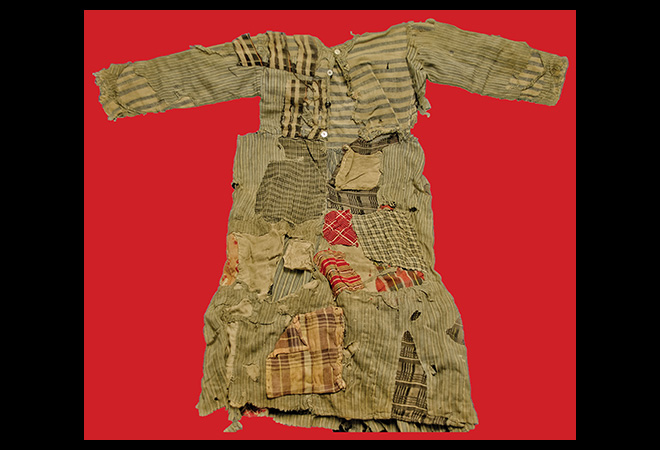 A continent away and almost a century after the Armenian genocide began, two important relics connected to the tragedy have resurfaced. They were found in the unlikeliest of places: at a small bible college in northern Indiana. The artifacts, a dress and rug, were uncovered by filmmaker Bared Maronian while he was researching his documentary Orphans of the Genocide.

In 1909, the Armenian village of Adana, a province of the Ottoman Empire in modern day Turkey, was reportedly pillaged by Turkish revolutionaries. More than 4,000 homes, roughly half the town, were torched. In the course of a month, historians estimate that 20,000 to 30,000 residents were killed.

Though it is not certain that the dress Maronian found was owned by an Adana orphan, the filmmaker believes that’s the most likely explanation for its provenance. Many survivors from Adana, including Maronian’s grandmother, traveled to neighboring cities after the massacre. Maronian believes that one of them, a young girl, made her way across 75 miles of mountainous terrain to the town of Hadjin located roughly 125 miles north of Mersin in Turkey. It’s now known as Saimbeyli, but back in the early 1900s when it was still Hadjin, it was home to the United Orphanage and Mission. Run by a North American Mennonite congregation, the orphanage was pressured by Ottoman authorities to cease operations. When WWI broke out, the missionaries were called home.

In 1914 Sister Dorinda Bowman packed up the dress, along with an unfinished rug that the orphan girls had been weaving, for her trip back to North America. The dress remained in her possession until she died in 1967. After her death, the 35″ by 58″ brown and gray wool rug, which is typical of Armenian rugs from the era, went to her nephew. When he passed away two years ago it was donated to Bethel College. Though it’s unclear exactly how the dress ended up in the archives of the Mishawaka, Indiana school, Bethel is an evangelical college affiliated with the same Mennonite congregation that ran the Hadjin orphanage.

“The dress, most likely worn by a seven year old, is a significant and tangible remnant of the Armenian genocide,” Maronian says. “A close look at the dress makes you wonder what the children went through and how only a handful survived. Most were butchered or faced death by starvation or disease.”

No one knows what became of the child who once wore the dress, but along with the rug it will be unveiled on March 22 during a daylong conference. Held at the Ararat-Eskijian Museum in Mission Hills, the only Armenian museum on the West Coast, the event will focus on the heroes and survivors of the genocide. The rug and dress will remain on display at the museum for two years, on loan from Bethel College.