Home Uncategorized 7 Things You Wanted to Know About Thomas Pynchon’s New Novel but... 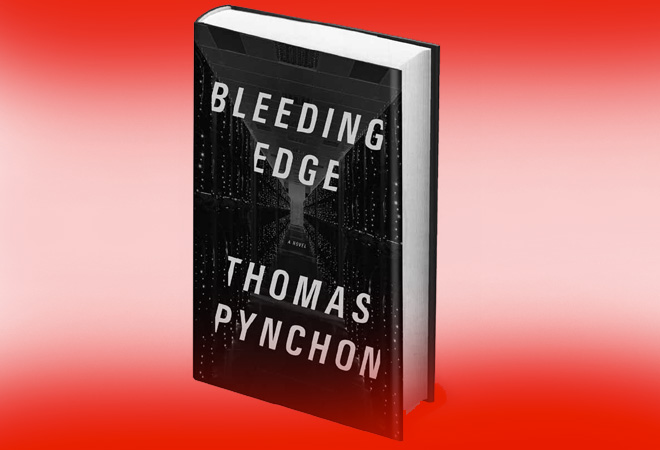 Welcome to the spring of 2001 and the waning days of unbridled dotcom imperialism. To paraphrase (or digitally upgrade) Wordsworth, “Bliss it was in that dawn to be computer-literate—But to be a hacker or entrepreneur was very heaven!”

This is the world of Bleeding Edge. Out today, it’s the eighth novel by Thomas Pynchon, the legendarily publicity-averse author of such books as The Crying of Lot 49, Gravity’s Rainbow, and Against the Day. (Don’t call him a “recluse.”) Keep a watchful eye on the word “shutter” in Pynchon’s works to see what he thinks of cameras. One of Bleeding Edge’s characters is captured in a government photo “as the covert federal shutter fell,” an echo of the line “as the guillotine shutter fell” in Gravity’s Rainbow. Weaving byzantine tales of history and technology leavened with outlandish names and lowbrow puns, Pynchon is erudite, inventive, impish, and utterly incomparable. One of the great pleasures of reading Pynchon is disentangling fact from fiction. Does Carnegie Mellon University actually offer the degree in bagpipes held by one Bleeding Edge character? Turns out that’s true. (Now, about the “Harvard crossbow team” in his first novel V. ...) Every time Pynchon releases a book, each page is analyzed down to its minutiae. Even before a book is released, there’s a pageant of prediction and projection. His 2009 Inherent Vice, now being adapted for the screen by P.T. Anderson, is his “L.A. novel.” Bleeding Edge, by contrast, takes place in New York City in 2001 so it must be a 9/11 book; it concerns the computer industry, ergo it must delve into the Internet’s dark DARPAnet patrimony.

Pynchon’s first novel in five years tells the story of an Upper West Side fraud investigator and mother of two who’s drawn into the shady interwebs behind the Web. If that sounds like the tagline for a Law & Order: SVU episode, that’s where a clairvoyant bike courier who continues to make deliveries long after his company has shuttered, an olfactorily attuned sleuth curious about Hitler’s cologne, a cadre of time-travellers “under orders to create alternative histories,” the Montauk Project, hacked Furbys, and the metaphysical enigmas of Mayan basketball courts all come in.

Let’s take a dive into the deep-end of the Pynchonian universe.

Where does the book’s title come from?
“Bleeding edge” is a term for early, untested technology, a bloodletting variant of “cutting edge.” As one programmer explains to Maxine Tarnow, the heroine of Bleeding Edge: “No proven use, high risk, something only early-adoption addicts feel comfortable with.” When asked whether her discoveries about the billionaire CEO of the computer-security firm hashslingrz might not make her too paranoid, Maxine quips, “Paranoia’s the garlic in life’s kitchen… you can never have too much.” Not long after, she reflects, “She hates it when paranoia gets real-world.”

How deep does it go?
Funny you should use that word because Maxine discovers that beneath the Internet known to most of us “surface-Net crawlers” there is a Deep Web. Two programmers introduce her to a virtual realm known as DeepArcher (“departure,” get it?). Like the Zone in Gravity’s Rainbow or the Visto in Mason & Dixon, this is one of Pynchon’s subterranean territories beyond charted time and space, an unmessed-with refuge for outcasts, explorers, and preterite souls. It is also a nexus of occult intel, a place for communications—perhaps even with the dead. Maxine’s travels within DeepArcher cause her to experience a bleed between the real world or “meatspace” and this cyber-ethereal domain.

What’s Pynchon’s take on the tech of 2001?
You decide. It is not any of the book’s many tech-savvy figures but Maxine’s father Ernie—who used to tell his daughter bedtime stories about the Hollywood Blacklist—who reminds her (and us) of the provenance of the Internet and where “this magical convenience that creeps now like a smell through the smallest details of our lives” could in fact be tending. He expounds on how easily we will submit to our own surveillance simply by coveting the au-courant communicative contraption. “Dick Tracy’s wrist radio? it’ll be everywhere, the rubes’ll all be begging to wear one,” decries Ernie, “handcuffs of the future.”

How does Maxine compare with other Pynchon protagonists?
One important difference between Maxine and Pynchon’s previous questers and investigators is her two sons. What distinguishes the Tarnovian from the Slothropian (Tyrone Slothrop being Gravity’s Rainbow’s protagonist) is Maxine’s ability to navigate the plot while attending to the daily exigencies of Ziggy and Otis’s school, extracurricular activities, and parties, to say nothing of her on-again/off-again relationship with their father.

What words will we learn?
Pynchon is famous for resurrecting obscure words and coining a few of his own. “Sillage” refers to a trail of scent. If you’re “breadboarding,” you’re creating a prototype on a solderless plugboard. There’s also alexithymic, soubrette, proösmic, p’tcha, bummersphere, epileptigogic, appoggiaturas, and cragfast. You’ll have to look them up to decide which are real and which are invented, though all are thoroughly Pynchonian.

Pynchon has been known to invent movies. What’s on TV in Bleeding Edge?
You’ll find Christopher Walken in The Chi Chi Rodriguez Story, Anthony Hopkins in The Mikhail Baryshnikov Story, Alec Baldwin in The Ray Milland Story, Homer Simpson in a noir called “D.O.H.,” Scooby Goes Latin! (“If it hadn’t been for those Medellín kids!”), The Marx Brothers’ Don Giovanni, and Leonardo DiCaprio in The Fatty Arbuckle Story.

So this is Pynchon’s 9/11 novel, right?
Many readers want to make Bleeding Edge about 9/11. They’re not entirely wrong, but that’s like saying The Crying of Lot 49 is about an alternate postal system. September 11th is a major thread in the novel. A strange pre-9/11 DVD materializes of a man on a rooftop aiming a shoulder-mounted Stinger missile at an airplane. Stories circulate about inexplicable stock trading on United and American Airlines as well as Morgan Stanley and other tenants of the World Trade Center in the weeks before September 11. Theories of every kind are put forward about 9/11 including its contribution to the death of irony and the ascendency of reality TV. “Out of the ashes and oxidation of this postmagical winter,” Pynchon writes, “counterfactual elements start popping out like li’l goombas,” alluding to those pesky mycomorphic creatures from the Super Mario Bros. universe. A “sherpa of the Deep Web” acknowledges to Maxine that this was more than a tech boom, that some kind of moment in history may have opened and closed, but not because of market forces, acts of terror, or even time-ops interventions:

“Maybe what we’ve been living through is just a privileged little window, and now it’s going to go back to what it always was.”

“You see, ah, trouble down the tracks?”

“Only a strange feeling about the Internet, that it’s over, not the tech bubble, or 11 September, just something fatal in its own history. There all along.”

The received cultural wisdom is that 9/11 “changed everything,” assumed the shape of a cultural nodal point. Pynchon suggests that such an event might provide a lens through which to view a greater story. The world of—and in—the Internet may provide a different mirror to our world or to the world we might almost have had. If we cannot find it or fathom it, the fault lies not in our software but in ourselves.