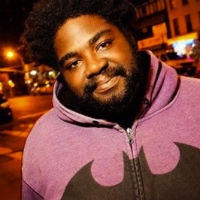 As kid growing up in Chicago, Ron Funches never imagined that comedy would be his career. Whenever he and his sister got in trouble, in order to avoid a scolding from his mother, Funches would use his talent to diffuse the situation. “I made up jokes about our mom and our family to my sister and she would crack up, and then my mom would too,” he laughs. “When my mom finally broke down laughing we didn’t get punished. She thought it was funny. That was the first time I thought to myself, ‘Maybe I am funny.’”

As a teenager Funches relocated to Oregon where he made his debut as a comedian about seven years ago at the age of 23. Since then Funches, whose loveable laidback stage persona is a perfect vessel for his razor sharp observations on everything from casual racism to raising a son with autism, has taken the national comedy scene by storm appearing on shows like New Girl, Kroll Show, and Conan O’Brien as well as starring in NBC’s upcoming show Undateable, which airs its first episode May 29. “I’m just generally pretty happy to be alive,” says Funches, who relocated to L.A. about a year and a half ago. “I think my comedy is about finding the good in bad situations—finding the joy. Why be angry? It doesn’t help anything.”

We spoke with Funches about his comedy, and finding confidence in strange places, and joking about things that matter to you.

❶ Funches recently completed a promotional tour for Undateable, an upcoming NBC show about a group of misfits who set out to find love. “It was the weirdest tour I’ve ever been on,” he says. “You usually stay at crappy motels with television sets from the ‘80s. On this tour, we’ve been staying at the Four Seasons and getting free massages.”

❷ Before turning to comedy full-time, Funches worked a range of jobs. “I’ve worked as grocery store cashier, I’ve worked at a bank call center, and as a Lady Liberty for Liberty Tax Service dancing around with the sign for a while,” he says. The latter taught him quite a bit about himself as a performer.

❸ “Dancing around with that sign really took my ego away,” Funches says. “It made me think to myself, if I can dance around with this sign then I should be able to go on stage on not be afraid of anything.”

❹ Funches’ style of performance is completely his own. Where many other comedians create stage personas that are boisterous, obnoxious, and loud, Funches prefers comedians “who can control a crowd while still being quiet.” Much like himself.

❺ “Some of my biggest influences are people like Steven Wright and Todd Berry,” Funches says. “I’m a shy person and I don’t think people who aspire to do comedy think that’s an option.”

❻ One thing that makes Funches’ act so compelling is his openness about being the parent of a child with autism. Funches brings up his son in his routine a lot, joking lovingly about his condition: “His three favorite words are ‘more,’ ‘pancakes,’ and ‘beyotch.’” “It’s a big part of my life,” he says. “Generally it’s easier to tell a joke over and over again when it’s something you truly care about.”

❼ The response has been positive. “A lady emailed me that her child had been diagnosed with autism and that hearing my material on the subject had helped her,” Funches says. “To me, it just means that I’m making the right decision in talking about this.”