Home Music 7 Things You Didn’t Know About Cabaret, Straight from the Mouth of... 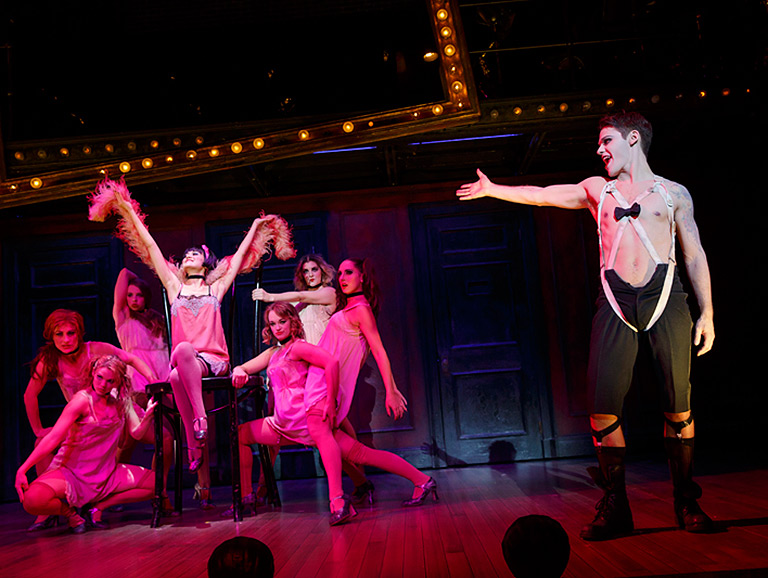 Composers have long been using musicals as a medium for social commentary. Given what we know (or think we know) of Cabaret from the memorable 1972 film—or the countless productions of the show—it was considered very provocative when it debuted in November of 1966: Here was a show that dealt with the rise of the Nazis (in a much darker way than The Sound of Music, which premiered in 1959), bisexuality, abortion, and the ugliness of human behavior. Dark topics for the time, but all set to the memorable songs by composer John Kander and lyricist Fred Ebb. With the touring production of Cabaret currently running at the Pantages Theatre in Hollywood, 89-year-old Kander took time to reveal some little known stories about the show.

He thinks the title song is regularly performed incorrectly
If you take the song without any context, it sounds like a really joyous, upbeat song. If you take it in context, it’s an awful moment in the life of the person who is singing it. She decides in the middle of it, I’ve always felt, to have an abortion. I don’t know that you can get that without the context.

The song “I Don’t Care Much” was written at a dinner party
We wrote really fast. I was at Fred’s house for dinner one night with three other people. We were talking about how fast we found ourselves writing. We got boastful, and Freddy said, “Clear the table, and we’ll write you a song between desert and coffee.” They took us up on it. We went to the piano and Fred said, “What do we write about?” I said, “I don’t know. I don’t care much.” Fred said, “Play a waltz.” I played a waltz and we wrote “I Don’t Care Much.”

During previews, they tried making “Cabaret” Sally Bowles’s first song and “I Don’t Care Much” her last
Goddard Lieberson, Columbia Records President, felt very strongly [about that]. We respected him a lot. We knew it was a terrible idea. We did it one matinee, and it really died.

There are three different versions of “Cabaret”
There are three versions now which we sanction. I don’t know that there will [be one definitive version]. I’m fond of all three. When “Meeskite” was taken out, I think we focused a little more clearly on exactly what was happening in Berlin. German Jews, some of my own family as a matter of fact, considered themselves much more German than Jewish, so it was a little dishonest.

His first reaction to the film wasn’t positive
It was so enormously different than the piece we had written. It took us time to get used to it. The first time Freddy and I saw it, we were kind of bewildered by it. The second time I thought it was just extraordinary.

You’d be surprised how people respond to songs in the show
A few years after Cabaret opened and ‘Tomorrow Belongs to Me” became kind of well-known, I got a note from a Jewish boy’s camp asking if they could use it for their camp song. I had to write back to explain what the song was. [Editor’s note: The song is written from the perspective of Nazi sympathizers.]

He would love for Cabaret to feel dated, but fears it never will
I think, unfortunately, as long as people act out of hatred, Cabaret will always be pertinent. Wouldn’t it be great if you went to see Cabaret and said, “I don’t get it, the world isn’t like this.” But the world is like this. I think it’s sort of ironic. Its popularity is an indictment of the world we live in.

The On-Sale Date for L.A. Hamilton Tickets Has Finally Been Announced

Another Magic Castle Is Opening Soon, and We’re Trembling with Anticipation