Home Books 7 Things You Probably Didn’t Know About the Making of Gone Girl,... 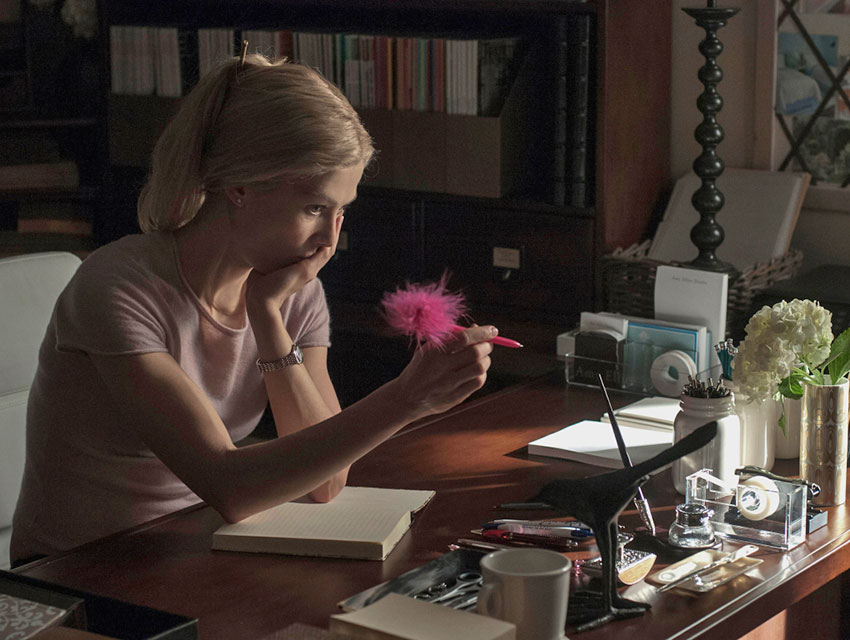 It’s been 15 years since David Fincher directed Fight Club, his first book-to-film adaptation, and when it comes to literature, he’s been nailing it ever since. After the success of The Girl with the Dragon Tattoo (based on a wildly popular Swedish crime novel) and The Curious Case of Benjamin Button (based on an F. Scott Fitzgerald short story), Fincher is back with another dark crowd pleaser: Gone Girl.

Told by two equally unreliable narrators, the missing woman mystery was one of the biggest books of 2012. The movie, which came out last Friday, has been a smash, bringing in more than $44 million.

Last night Fincher sat down for an hour-long Q&A hosted by Film Independent at the Ace Hotel to discuss what attracted him to Gone Girl. Like Fight Club, it grabbed him right away. He was attracted to the way author Gillian Flynn started the story as a mystery, turned it into a thriller, and ended it as an absurdist satire. The main characters are both anti-heroes, and there is no happy ending. In other words, dark subject matter for David Fincher.

How He Chooses Books to Adapt as Movies
Gone Girl attracted him because of its elaborate plot and the idea that narcissism could hold two people together. His movies often feature characters with dark sides because, he says, “I’m interested in those things where you have trouble rooting for one person.”

On Casting for Desi
It was hard to cast the character of Desi, the creepy stalker. The book provides little backstory for him and Fincher couldn’t figure out who could play him. He asked Gillian Flynn if the character was based on someone she knew, but she said she had made him up. One night while flipping through channels Fincher saw Neil Patrick Harris hosting the Tonys and knew he had found his man.

Why Ben Affleck Was Perfect as the Husband
Fincher needed to find a male lead who could be charming but also possibly murderous. He needed also figured Affleck would know what is was like to be scrutinized by the media. “He’s been through it; he knows what it’s like to be tossed from the 35 foot waves of public perception.”

On the Movie’s Length
With a run time of 149 minutes, Gone Girl is not a short movie. Not that Fincher noticed until his first screening. “I wasn’t really aware of how much talk there was until the premier. The actual page count wasn’t really something I was aware of,” he said. “Nothing will convince you your movie is too long like opening at the New York Film Festival.”

On His First Time Watching It with an Audience
“It’s like having a cesarean in front of 700 people. It’s horrible. It’s like, just cut the cord!”

Sometimes a Game Is Just a Game
After watching the movie, Fincher says fans keep finding significance in places where there wasn’t meant to be any. Like when Nick gives the game Mastermind to his sister in one of the opening scenes. “Part of the curse of working in cinema is that nothing is treated as accidental. There’s no significance in the game Mastermind; it was the only thing we could clear. When you cut to something it gets this weird significance, so you have to be careful.”

On Letting Go
Fincher doesn’t like to watch his movies once they’re finished. The last time he saw Fight Club he was channel-surfing and the sight of it made him grimace: “It’s like flipping through channels and suddenly seeing your graduation picture.” He says it’s hard because you always feel like you can make a movie better if you just keep working on it, which is why he agrees with the axiom, “Movies aren’t finished, they’re abandoned.” Per Fincher, “There are no right or wrong answers. There’s just more or less effective wardrobe or lighting.”