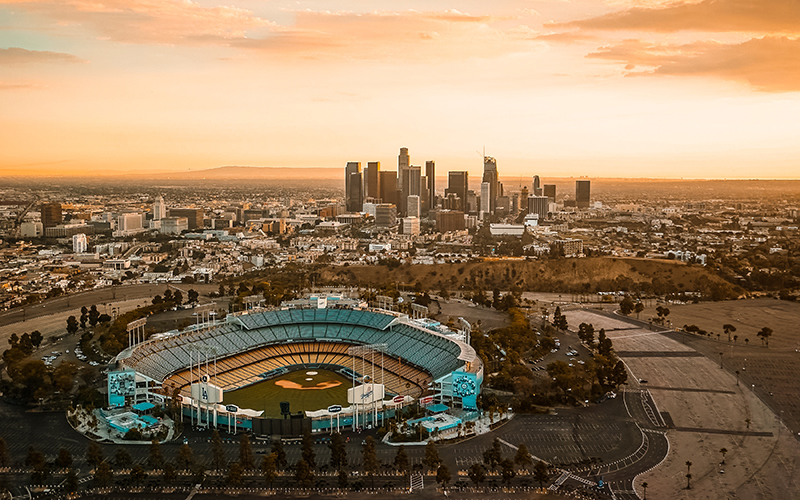 Unique L.A. is kicking off two months of mini artisanal markets this Saturday (if you can’t make it this weekend, don’t fret: catch it every Saturday in April and May). The “streets” of ROW DTLA—the same spot that hosts Smorgasburg on Sundays—will be filled with tent after tent of goodies from brands like Rose Gypsy, Smiths and Kings, Lit Candle Supply, BOLLA KILLS, and more, plus snacks from Mamamusubi and Dough Rei Mi Pies. If you do decide to do a ROW twofer and hit up Smorgasburg the next day, you’ll be able to fill up on delicious eats and pick up some sick vinyl: Every third Sunday of the month, Smorg teams up with Beat Swap Meet to bring you a record fair with live DJ sets curated by dublab Radio as a bonus.

Pups at the Park
April 14

Is there anything better than puppies and Dodger baseball? Before you think too hard about it, the answer is no. (Except for maybe puppies AND baseball AND easy in/easy out stadium parking AND a surprise appearance from the Backstreet Boys, but we don’t live in a fantasy world.) Snag a special event ticket and bring your fuzzy friend to Dodger Stadium for their Pups at the Park event, where the whole Right Field Pavilion will be set aside for both two- and four-legged fans of America’s pastime. There are some ground rules, though: be sure to buy a ticket for you and your pup, and bring proof of his/her vaccinations.

You can see some of Randlett Lawrence’s dazzling glass installation, dubbed Randyland, from the street, but on Sunday, Atlas Obscura hosts an intimate tour of the piece with the artist himself. Step into the front yard of his Echo Park home to hear the story of how his mind-boggling creation came to be, then ogle its 1,000-plus water-filled glass orbs as they refract the light from a classic L.A. sunset.

Pacific Opera Project is all about bringing arias to the people on the cheap. This month it puts on Mozart’s version of Don Juan, staging it cabaret-style at the Vortex downtown. Expect food, wine, and (thankfully) English subtitles.

Pixar Pier isn’t opening at California Adventure until June, but the resort is kicking up some early Buzz (had to). Catch character floats festooned with millions of lights during California Adventure’s Paint the Night parade, or watch Captain Lightyear soar over Sleeping Beauty’s castle in a new fireworks display at Disneyland.

Friends of the L.A. River—the organization that helped get the river revitalization movement going—has made its cleanups into an annual ritual. Throw on some sneaks and head to the upper (April 14), middle (April 21), or lower (April 28) portion of the 51-mile water- way to pitch in during the trash- collecting efforts.

LACMA is the only museum in the country to host this exhibition, which originated in London. Most paintings were done at Hockney’s L.A. studio in what he calls “20-hour exposures”; his subjects are staff, family, and friends like John Baldessari and Benedikt Taschen.