Home Uncategorized The 7 Best Things to Do in L.A. Over Fourth of July... 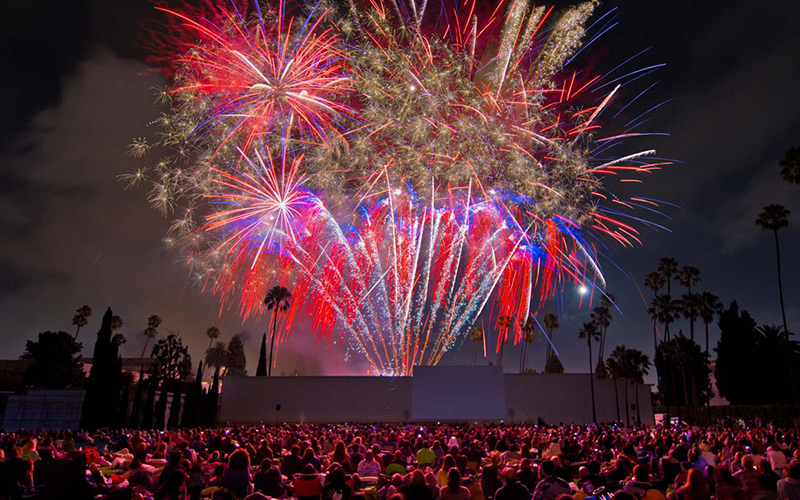 Before we get rolling, I’ll do you a solid: If all you want out of this is a deep and comprehensive knowledge of all the fireworks displays you can see in L.A. this weekend, you’ve come to the wrong place. But that place exists right here. For all other manner of fun activities, some of which still include fireworks, proceed.

Head to Abbot Kinney on Sunday for the Uncle Sam Jam, a music-fest-slash-outdoor-party-games-thing that feels like a really great way to spend a Sunday. Phantogram headlines, and there will be plenty of food vendors on hand; if you’re feeling extra competitive, sign up for the cornhole tournament or get in on some oversized beer pong. Little ones will be down with face painting and kiddie pools. More information (July 2, Abbot Kinney Boulevard)

Nothing like an ice cold brewski at the end of the tunnel to get you to try harder during a workout. Iron Triangle Brewery hosts a 90-minute boxing and yoga class this weekend, the more exciting payoff of which is a free pint (over, like, endorphins). This Sunday’s event is the last of the season, so get your keister in gear for the beer. More information (July 2, Iron Triangle Brewery)

Is there anything more American than dinosaurs and exploding gunpowder? Hard to be sure, but no. Pack a picnic and head for everyone’s favorite cemetery on July 4, where you’ll be in awe of (A) how well Jurassic Park holds up, and (B) some magical fireworks. Get there early to score a primo slice of grass for both shows. More information (July 4, Hollywood Forever)

Pentatonix at the Hollywood Bowl (Plus Fireworks!)

I’m going to argue that this is more about the music than it is about the fireworks. (But don’t get it twisted—the fireworks are an excellent bonus.) A cappella has come a long way since Rockapella’s rendition of the Folgers jingle—no disrespect—and Pentatonix is the group leading the charge. The three-time Grammy winners showcase their mind-melting harmonies and impressive beatboxing skills at the Hollywood Bowl for three nights straight; anyone following the PTX dramz on social media will know this is one of bassist Avi Kaplan’s final shows with the group before he moves on to more instrument-driven things. More information (July 2-4, the Hollywood Bowl)

If you’re one of those people who thinks they have a bottomless stomach, test your might at the original and largest Asian-themed night market in the United States. More than 200 vendors set up stalls at Santa Anita Park June 30-July 2; chow on all manner of insanely Instagrammable foods like cold noodles, egg waffles, corn in a cup (?), pho tacos, and so, so much more. More information (July 1-3, 22-24, Santa Anita Park)

Some awesome fan art from @chrisdashrob. If you’ve seen #TheBigSick, you’ll get it. If not, well, hopefully you’ll fix that soon.

If you identify as an indoor kid, ArcLight Hollywood has orchestrated the weekend of your dreams. Lezzgo:
Friday: Comedian Kumail Nanjiani and Kurt Braunohler will discuss The Big Sick at its 6 p.m. screening; Molly Shannon, Kate Micucci, and Lauren Weedman host a Q&A after the 7:15 p.m screening of The Little Hours (they’ll also stay after to introduce the 9:40 p.m. show).
Saturday: Actress Aubrey Plaza and director Jeff Baena take questions after a 7:15 p.m. screening of The Little Hours and introduce the 9:40 p.m. show.
Friday and Saturday: Baby Driver writer/director Edgar Wright does a Q&A after the film’s 7 p.m. and 8 p.m. screenings and will introduce the 8 p.m. and 9:30 p.m. shows.