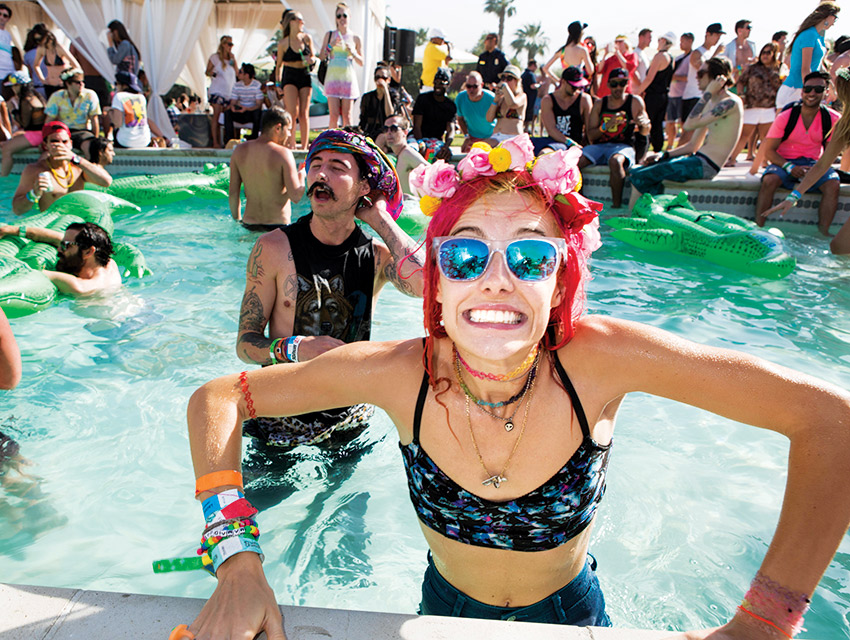 Just as Chicago is a smaller, less aggressive, cleaner New York, we can confirm what has until now been a divisive matter: Pool parties in Palm Springs are smaller, less aggressive, cleaner versions of the ones in Las Vegas. Despite its rep as a quiet resort town, the desert oasis has become a destination for waves of young, sexy millennials in the steamy summer months—thanks in part to Coachella.

The fest descended on Indio in 1999; ten years later the trendy Ace Hotel and Swim Club opened its doors. The sherbet-colored Saguaro followed in 2012. They’re only  two of many spots that host waterlogged ragers—with guest DJs and free-flowing booze—on sun-soaked decks. The newest  inn to join the fray is Arrive Hotel, whose Sundays-only pool party (aptly called #AssistedLiving) offers unicorn floaties, boccie, and fire pits. It’s a scene to rival the bedlam at Wet Republic or Marquis Dayclub, two of Vegas’s biggest poolside bashes, only with a shorter travel time, cheaper rooms, and fewer crowds. Don’t fret if drinking and dubstepping aren’t your speed—the pool at the Parker is still ideal for  some überchic R&R.

@SUMMERTRAMP was a BLAST. Thanks to everyone who came out this weekend. Photo: @charleybeard