Home L.A. History How to Find Local Treasures Even Lifelong Angelenos Might Not Know About 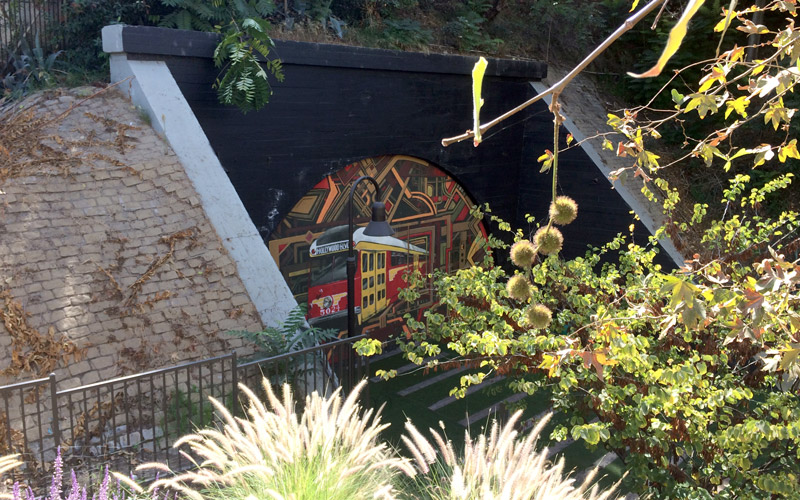 You could spend your whole life sorting through the sprawl of Los Angeles and never run out of places to discover; you just have to know where to look. That’s why we met up with Dylan Thuras—co-founder of Atlas Obscura and co-author of a new book of the same name—to tour some of the more eccentric corners of the city (limited mostly to the greater Echo Park area because, let’s be real, L.A. is endless). Thuras is a master of uncovering the kind of city spaces that reward those willing to look closely, and it’s hard to imagine anyone bringing more outright enthusiasm to the art of urban exploration.

In a pristine if unassuming Silver Lake house, 89-year-old Betty Shepard led us through five rooms packed with Middle-Eastern artifacts (including a cedar Egyptian sarcophagus) and tchotchkes. The collection was amassed by religious adventurer Antonia Futterer, whose two-year quest to uncover the Ark of the Covenant in the 1920s is said to have inspired Indiana Jones.

Shepard paused the tour in the “Pharaoh’s Treasury” to dress us up in traditional Bedouin garb. She also repeatedly advised us to keep an eye on Jerusalem—because the Ark of the Covenant will be uncovered soon and, you know, will usher in the end of days, as has been foretold.

The lifelong passion project of the late Bob Baker, the theater still hosts whimsical puppet shows and children’s birthday parties. Creative director Alex Evans walked us through the theater’s storage where well over 2,000 plastic-wrapped puppets hang from the rafters, like the victims of a serial killer. The whole place is like 50 percent charming, 50 percent unsettling, in the best way possible.

How to get in: Grab tickets to one of the daily shows. Oh, and go soon if you want to see the theater before it’s converted into the lobby of an apartment complex and the puppet shows are transitioned to a new facility.

Across the street from Bob Baker is the entrance to a tunnel for the long-defunct Hollywood Subway. The underground space became a Mecca for west coast graffiti in the 1980s. Now, however, it’s sealed off, fenced into the backyard of the Belmont Station apartment complex, decorated with a mural.

How to get in: You can see the tunnel’s entrance from the end of Toluca Street. You can’t go in anymore (though Obscura Society—Atlas Obscura’s adventure arm—once convinced the owners to open it for a tour). To see how the tunnel used to look, your best bet is to convince the Belmont Station apartment concierge to let you see the historic photos of the tunnel mounted on the lobby wall.

Just behind the Bob Baker Marionette Theater is an alley decorated with animal-themed murals (including one by Spanish-French street art duo Dourone)—part of an initiative launched last year by gallery owner Jason Ostro to mural-ify side streets of L.A.

The art of stop-motion animation is alive and well in this Echo Park studio adorned with a giraffe-shaped sign reading “Hi Fi Deli” (it’s not a deli). Since 2003, Mark Caballero, Seamus Walsh, Christopher Finnegan and their team have been serving up deftly crafted animation for the likes of Cartoon Network and Nickelodeon.

How to get in: Invitation only, sadly, but keep an eye out for their upcoming short “The Witch Doctor.”

In the C. Erwin Piper Technical Center (a concrete monolith where you can literally smell the bureaucracy), city archivist Michael Holland guided us down florescent lit aisles packed with 150,000 cardboard boxes of city files, old maps, and drawers full of cassette tapes. It’s basically the warehouse from final scene from Indiana Jones, which, given where we started, seemed an appropriate way to end the tour.

How to get in: Be a journalist or a researcher, basically. If you are one of those things, and you’re looking for something specific (like the deed to Griffith Park or mundane City Council records from the 1930s), drop them a line, and they’ll help you out.