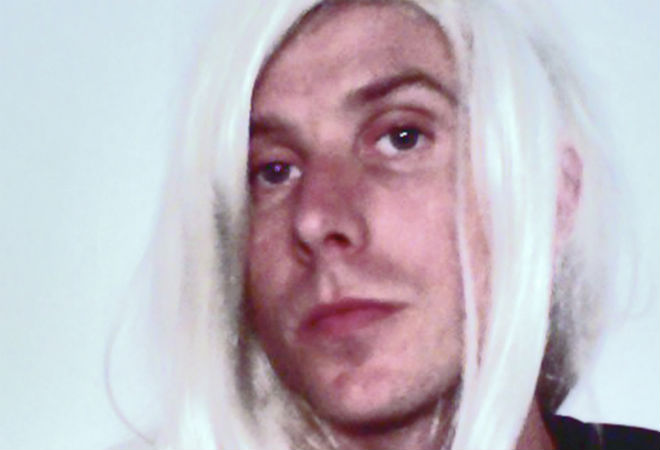 The last time musician Jack Name (birth name: John Webster Adams) had a straight job he was a deliveryman for a flower company. “I was slaving away for nine bucks an hour, just running myself into the ground,” says the 32-year-old, whose album Light Show—his first under the Jack Name moniker—comes out next week. “You get a lot of deliveries to hospitals and you have to bring the flowers to the patients yourself. I saw a lot of crazy stuff. A girl who’d lost both her legs in an accident.”

Name’s previous projects— one under the name John Webster Johns issued by Attacknine Records and a handful of independently released recordings under other names—have earned him a reputation as a musician’s musician. Name is also touring guitarist for White Fence aka Tim Presley, who recently told Pitchfork he prefers L.A. to San Francisco. Name took some time away from preparing for his Light Show tour to talk about music, anti-identity, and battling the woolly bullies of the world.

❶ Workaday drudgery inspired Name, who was born in Copenhagen, Denmark and grew up in Los Angeles, to pursue a life as a musician. “I never had a moment where I knew that was what I was going to do,” he says. “I just had a feeling that that’s the species I am. Music is a make-believe world that appeals to me.”

❷ Name is as enigmatic in person as he is onstage. Although he usually performs with only one other musician and a pre-programmed backing track, he has appeared with everything from big brass bands to conventional rock quartets.

❹ Name has performed his material under several different names—Muzz, Fictional Boys, and now Jack Name—but they’re not structured personas à la David Bowie’s Ziggy Stardust. “They’re just different names. It’s all the same thing,” he says. “I’m sort of anti-identity,” he says. “Sometimes I’ll dress in drag for a couple of weeks, but then I’ll shave my head and wear the same clothes for three months afterwards or something like that. I like the idea of destroying identity. The name thing is part of that, too. We’re all the same underneath it all anyway.”

❺ Nonconformity is a central theme in Name’s work, one that permeates the lyrics of Light Show, an album in defense of children who are labeled as misfits. The overarching narrative depicts a battle between “shadows,” or troubled children, and the “woolly bullies” who oppress them. “I have a problem with the way kids are put on drugs for educational purposes,” Name explains. “I’ve always questioned the whole idea of ‘chemical imbalance,’ because I don’t think there’s anything wrong with those kids. There’s something wrong with the world.”

❻ When asked about his Angeleno upbringing, Name muses, “There’s something about L.A. that looks a lot like Dr. Seuss books to me. The nature has an alien quality. It’s a really good place for make-believe.”