Home Theater This is What It’s Like to Act Out the Brutal Interrogation Scene... 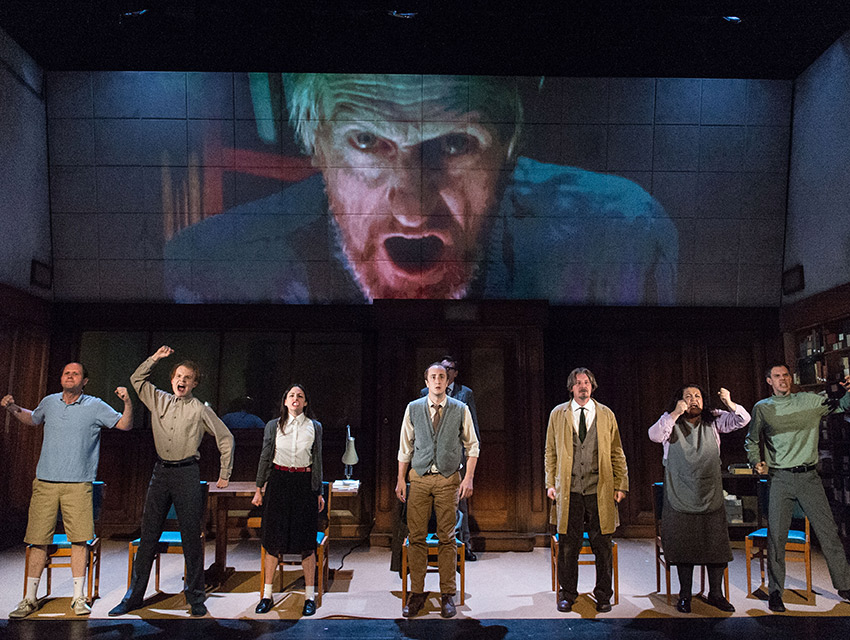 Perhaps the greatest joy for an actor is landing a role that encourages (and even requires) him or her to stretch themselves. The role of Winston in Robert Icke and Duncan Macmillan’s adaptation of George Orwell’s 1984 in just such a part. Actor Matthew Spencer plays the highs and lows of Winston’s journey in this new production of the classic novel (a dystopian classic characterized by government surveillance, war, and rampant manipulation), which is running at the Broad Stage in Santa Monica through February 6.

“The play itself is very helpful in the way it is structured,” Spencer says by phone before a recent performance. “The first 20 minutes I’ve got very little to say. It does ease me into it, like Alice down the rabbit hole, until I’m finally fully in that world. I don’t have to go straight into [an interrogation scene] in minute five—by the time the scenery is collapsed, I’ve had an hour on stage to prepare myself.”

In this production of 1984, Winston is at first baffled by the things going around him. He learns that Big Brother—a political personality in the book—is not only watching, but watching him and the new woman in his life in an effort to quell individualism and “thoughtcrimes.” When Winston becomes a dissenter, he is captured and subjected to intense scrutiny.

“101” is the extraordinarily brutal interrogation scene in which Winston is pushed to reveal the name of a Big Brother co-conspirator. “The directors had lots of films in their heads, more than theatre, when they were looking for inspiration,” Spencer says, referring to the scene as “very violent.” “Lots of Kubrick: The Shining, A Clockwork Orange—those dystopian worlds are definitely part of the language of the rehearsals in the creation of the piece. We looked and explored and revisited those futuristic and horrible worlds that are out there.”

Reactions to the show have varied wildly according to Spencer. “Hopefully we don’t let them off the hook,” he says of the audience. “They are complicit in what’s going on. Wednesday night we had a woman in the front row, and when the white walls came out, she covered her face for the rest of play. We got a fantastic reaction last night—someone made a gut-wrenching vomit sound. Theatre should be about opening discussions, not answering them.”

Spencer, who was born in England, is intimately familiar with the idea of pervasive surveillance. Citizens of London live with cameras everywhere. And he has mixed feelings about seeing ubiquitous surveillance gain ground. “We had a lot of debates about that in rehearsals,” he says. “You’ve got two sides of the coin, which are completely valid: If you say, ‘I don’t want my e-mails being read,’ then you are opening yourself up to the possibility of terrorism. The flip side is, ‘I surrender my own privacy,’ and that will supposedly stop attacks. It’s a catch-22. What’s the lesser evil? It’s an interesting question. That’s one of the great things about doing this version of the novel. It’s hopefully putting a mirror up and asking the audience those questions.”

Spencer agrees that while most people who are inclined to go to the theater are liberals, Orwell wasn’t necessarily playing to one side versus another. “Over the years, various political parties or movements have claimed the novel as their own,” he says. “Each comes away thinking they know what the novel is about, but Orwell was keen never to state his political agenda. He died shortly after the novel was published, so no one could do these interesting interviews. We think we know, but it’s all interpretation.”